As we’ve covered multiple times on this very website, if you pick up a book every now and again you’ll find that history is littered with all sorts of cool shit. Something the BBC kids sketch show, Horrible Histories based its entire premise on, in the process winning awards and praise for its humor and educational content.

This is because the show, based on a book series of the same name, decided to focus mainly on all the disgusting, stupid stuff from history it knew would make kids perk the fuck up and take notice. You know, stuff like the fact Henry the 8th’s corpse exploded when he died or that the Norman’s won the battle of Hastings by repeatedly running up and down a big hill. The show was specifically written to speak to children in a non-patronising way and to this end, went out of its way to address common misconceptions kids might be taught in school and didn’t shy away from subjects like war or slavery, though discussed them in a way suitable for the intended age range. 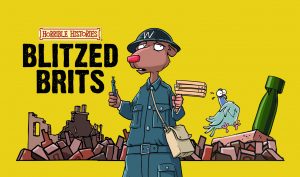 However, also knowing that the show would be watched by parents, the show also included numerous nods to British pop-culture and full length music videos spoofing genres and bands adults would recognise, like this viking themed soft-rock ballad.

Because the show went out of its way to appeal to adults, featured bizarre non-sequiturs, toilet humor and obscure pop-culture references, it ended up being an unexpected hit with the biggest kids of all, stoned adults and teenagers. This saw it eventually becoming one of the most popular comedy shows on British television during the time it aired, winning an award for Best Sketch Show in 2011. Noteworthy because Horrible Histories not only had a lower budget than every other show it was against, but was also constrained by the fact all of its content had to be both historically accurate and suitable for children.

Speaking of which, the show’s historical adviser claims that during the show’s entire run, he only counted 8 errors our of an estimated 4,000 fucking facts. An error rate so small it could be used to measure the width of an ant’s dickhole. The show’s costume department similarly only dressed the actors in period accurate clothing and insisted on make-up and hair styling that would have existed at the time so as to not give kids watching an unrealistic image of the past.

This means a children’s TV show largely revolving around poop jokes and parodying British pop-culture, contains more factually accurate information than virtually any of the shit put out by the History Channel these days. Yes, even Ancient Aliens. 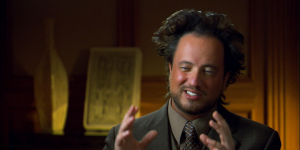