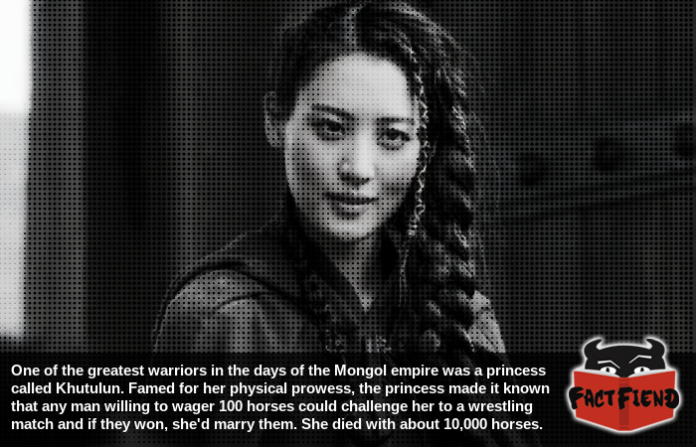 It has been well established in fiction by studios like Disney that if there’s one thing princesses love, it’s pretty horses. While you’d assume that this was an exaggeration or even invention of Hollywood, if the warrior princess Khutulun is anything to go by, it’s pretty damn accurate.

The daughter of the large-wanged Mongol leader Kaidu and the great-great-granddaughter of Genghis Fucking Khan, Khutulun was born into a society that valued three things above all others, archery, wrestling and horses. 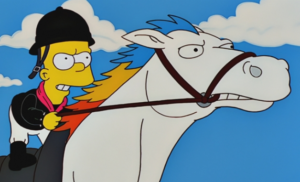 Now while Khutulun wasn’t technically a princess (because Mongol society didn’t play like that), as the daughter of what effectively amounted a Mongol King, she might as well have been. Unlike one of those wimp-ass Disney princesses though, Khutulun didn’t spend her time swanning around in crystal footwear or singing to adorable woodland creatures. No, Khutulun was more like one of those later Disney princesses, you know the ones who communicate through worm-hole generating light speed punches to the skull. 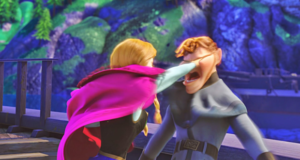 Famed for her beauty, Khutulun had many suitors throughout her life, all of whom she told to fuck right off the edge of her mighty, mongol woman-dick. Under pressure from the various men in her life to take a husband, an annoyed Khutulun decided that if she had to marry someone, it might as well be a guy who could body slam her into to dirt at the speed of sound. With this in mind Khutulun let it be known that she would consider a proposal of marriage from anyone who wanted to fuck her so long as they wagered 100 horses. Why 100 horse you ask? Well Khutulun had to do something weed out all the 13th century fuck boys.

Although the exact number of men to take Khutulun up on this offer isn’t known, legends posit that by the time she died her personal horse army numbered in the thousands with some sources claiming she owned in excess of 10,000 horses. Which, if true, would mean that Khutulun effortlessly kicked the ass of over 100 potential suitors with her kung-fu wrestling skills. 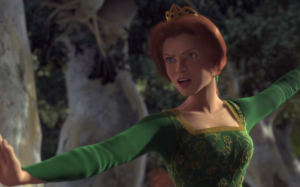 Speaking of which, it’s worth noting that during Mongol times wrestling matches had no weight classes or pussy shit like that, anyone could fight anyone meaning Khutulun was potentially fighting people three times her god-damn size. At this point you may be wondering how a 100 pound Mongol princess would be able to beat a screaming hunk of man-meat intent on body checking her into next week and the answer is, through sheer skill.

Being the daughter of such a high-ranking Mongol leader meant that Khutulun was given the best training possible when it came to all facets of whupping ass and as a result, she became almost untouchable in one-on-one combat. 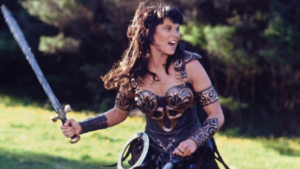 While that sounds like hyperbole it really wasn’t and it’s reported that one of Khutulun’s favourite opening gambits in battle was to let out a war cry, ride over to where the enemy was gathered and single out the most important looking soldier. Khutulun would then grab them, sling them over her shoulder and ride back to her own ranks to present the still-shitting-themselves-in-fear soldier to her father like a present. Because that is how you establish a reputation as a fucking warrior.