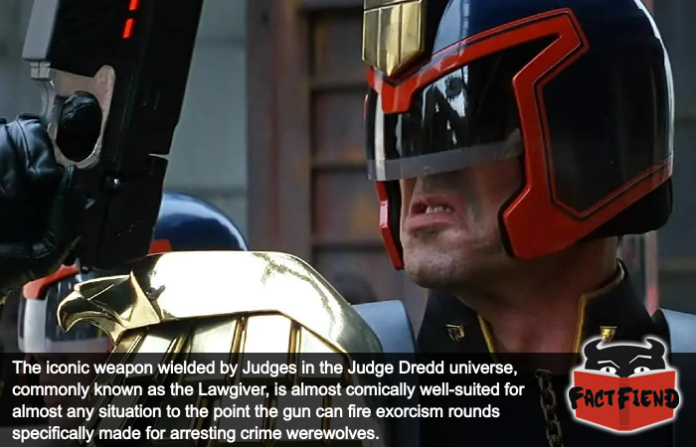 Judge Dredd lives in a universe so corrupted by malignant crime-energy that even the icy hand of death isn’t enough to stop someone occasionally committing big crime. As a result, the 2000 AD universe has established that Judge Dredd uses a gun capable of shooting crime ghosts.

First though it’s probably worth noting that the Judge Dredd Universe is positively filled with spooky crime shit to the point there’s even a special division of Mega-City One’s police department specifically tasked with dealing with it. Unimaginatively dubbed the Psi Division in reference to most of its members possessing some degree of latent psionic ability, members of the Psi Division are routinely tasked with reading minds and arresting demons trying to steal people’s shit. No, really. 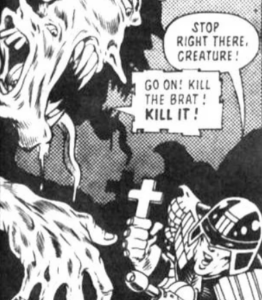 As a result of their, shall we say, unique duties, members of Psi Division are equipped with a variety of random stuff to help them better deal with the supernatural. This includes but is not limited to various bits of religious iconography, silver knives and most pertinent to today’s article, ANTI-CRIME WOLF BULLETS.

To explain, every Judge in the Judge Dredd universe wields the awesomely named Lawgiver hand-cannon, an ultra-advanced mega-gun purpose built to fuck up crime. Supremely adaptable and customised to each specific Judge’s individual crime-fighting idiosyncrasies, the Lawgiver can be programmed to fire things as specific as rubber-tipped syringes full of heart-stopping drugs that can cap a criminal from around corners. 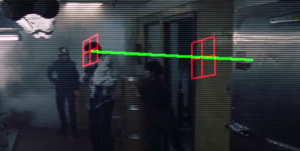 One of the most highly specialised bullets in the Judge arsenal are what’s known as Exorcism Rounds, used primarily against supernatural threats, but are noted as being equally as deadly against a regular person as most people don’t like having a sliver of garlic soaked silver driven through their skull at mach 3.

What makes these rounds so deadly though is that they aren’t just suited for taking out any specific supernatural foe but all of them at once so that they can reliably be used against basically any supernatural foe including ghosts, werewolves, vampires and demons. All of which periodically commit crime in Mega-City One.

Now while these specialised bullets are normally only carried by members of Psi Division, Judge Dredd, being a paranoid motherfucker, is also known to carry them. Meaning Judge Dredd literally carries bullets containing pieces of the true cross to kill CRIME VAMPIRES.