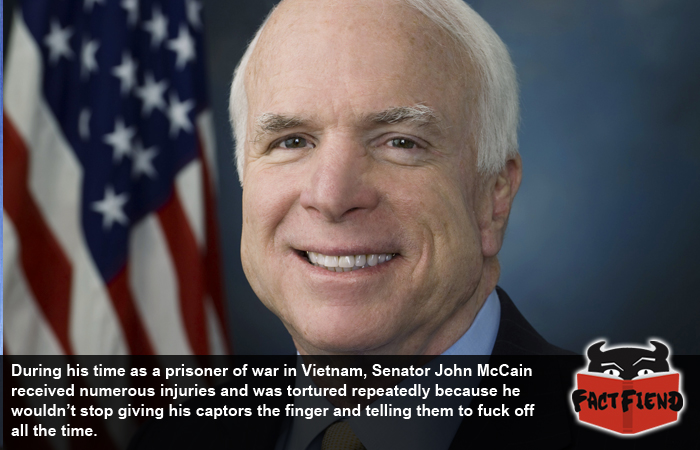 Remember when Donald Trump said that Senator John McCain wasn’t a hero because he was captured by the Vietnamese and then spent the next day or so shitting out the soles of his shoe from shoving his foot so far into his mouth? Well we sure do and we were so curious that decided to read up on John McCain’s war record and came to the conclusion that if this guy isn’t a hero, he’s at the very least, a stone cold badass.

First though some background information for those of you who for some reason haven’t read up extensively on the life of a man who is mostly known to denizens of the internet for this singular image: 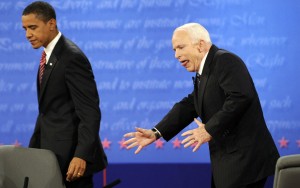 Prior to being a perpetually old, potato looking gentlemen with an remarkably well tailored suit, McCain was a lantern-jawed Naval pilot who looked like he could shatter plate steel with his chin.

In 1967 McCain was hit by a missile while piloting a plane during a bombing run over Hanoi, after being hit, McCain’s jet was sent hurtling towards the ground at several hundred miles per hour, forcing him to eject from the plane. The force of the ejector seat, which had to compete with both the spinning of the flaming aircraft and the weight of McCain’s heaving, pendulous, cast iron nutsack, shattered bones in McCain’s arms and legs before flinging him into a lake. Despite breaking both of his fucking arms McCain was able activate his life vest to avoid drowning, a few minutes later he was dragged roughly out of the lake by angry North Vietnamese soldiers who proceeded to break his shoulder before stabbing him in the ankle and groin with bayonets. Just read that sentence again so that you fully understand it, Senator John McCain was stabbed in the dick during the Vietnam was before being sent to a POW camp.

McCain was then transferred to infamous Hanoi Hilton POW camp where his captors gave him a simple ultimatum, tell them everything he knew or they’d beat the living shit out of him. McCain told his captors to fuck right off. It was only after weeks of beatings, torture and interrogation that McCain agreed to surrender any information to his captors, in return for basic medical treatment that would stop him from dying. Even then, McCain gave out information that was either of date, useless on its own or pulled out of his ass so that it couldn’t be used to harm other Americans. For example, when asked at knife point to give the names of other men in his squadron, McCain instead began listing the Greenbay Packers offensive line.

It was only when McCain’s captors learned that his dad was a fucking Admiral that they gave him anything in the way of proper medical care. Even then, this medical “care” involved sitting in a damp hospital bed while poorly trained doctors repeatedly tried to set the bones in his shattered limbs without anaesthetic.

After his brief, but painful stay in hospital, a renewed McCain resolved to never let his captors break him again and from that point on he became a ridiculously huge pain in the ass for them. For example, whenever McCain was forced to record messages for propaganda purposes, he’d intentionally speak with a stupid accent and slur his speech so that it wouldn’t make any sense to native English speakers and whenever someone tried to take his picture for the same reason, he’d give them the finger and tell them to fuck off. Something which almost always resulted in either another beating or session of torture, but was, to quote what we think McCain would say if he wrote for this website, “totally worth it“.

In an effort to break the spirit of his fellow POWs by showing that McCain would jump at the chance to use his father’s sway and connections to help himself, the Vietnamese offered to release McCain and send him home as a sign of good faith to the US. McCain told his captors to shove their offer right up their dickhole, stating that he’d only consider leaving if every POW captured before him was released as well.

This unsurprisingly pissed off the North Vietnamese who proceeded to torture him for an entire year, POWs in the same camp as McCain would later recall that they could often hear him being tortured, loudly telling his captors to fuck off the edge of his dick as they tried to break his bones again.

After a half decade of almost constant torture, malnourishment and generally having a bad time, McCain was released along with hundreds of other POWs. He then went on to have a successful career as a male model, or at least he should have judging by some of the photos that were taken of him almost immediately following 5 years of unthinkable torture.

To read about more ridiculous acts of badassery during war time, why not read about how JFK once saved someone’s life from a pool of water (which was on fire) with his teeth.