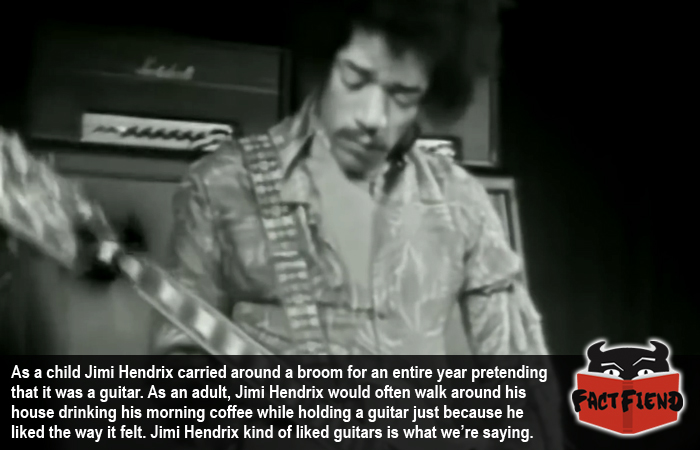 Jimi Hendrix’s name is so intrinsically linked to the guitar that to this day, slamming all of an amplifiers knobs to the maximum setting is still referred to as the “Hendrix setting” by some people. Something he earned by pretty much walking around with a guitar everywhere he went.

We don’t mean that he spent a lot of his time on Earth on stage ripping solos and melting faces, we mean that in his day-to-day life, Jimi Hendrix was almost never seen without a guitar strapped around his waist. Numerous sources and many of Hendrix’s former girlfriends and friends have admitted over the years that Hendrix wouldn’t even grab his morning cup of coffee without first putting on a guitar.

If the image of Jimi Hendrix casually pea-cocking around his house holding a guitar that would eventually be worth more than your house reading the morning paper isn’t something that makes you smile, you should probably consult a doctor, or at least 7 of Jimi’s albums.

This trait isn’t something Jimi picked up in his later life either, as a child, before he’d even learned to play a single chord, young Jimi would carry around a broom pretending that it was a guitar. Jimi even took the broom to school with him and the peculiar behaviour became so alarming to a social worker at his school, that she petitioned for local authorities to stop being dicks and just buy him a freaking guitar already. We should point Jimi had been carrying the broom for an entire year by this point.

However, the school didn’t see anything odd about a kid carrying a broom for an entire year and theyl heroically refused to provide him with a guitar, even though doing so would have given us the better version of All Along The Watchtower like 5 years earlier. But we digress, it wasn’t until a few years later and after practising on both a one stringed ukulele and an acoustic guitar he bought for 5 dollars that Jimi was able to shred the crap out of an electric one.

With all that in mind, it’s no surprise Jimi didn’t like not holding one, the guy waited like 15 years to get his hands on one, like hell he was going to let it go.

This CD could contain nothing but the sound of Jimi farting into the mic and we’d still give it 5 stars.