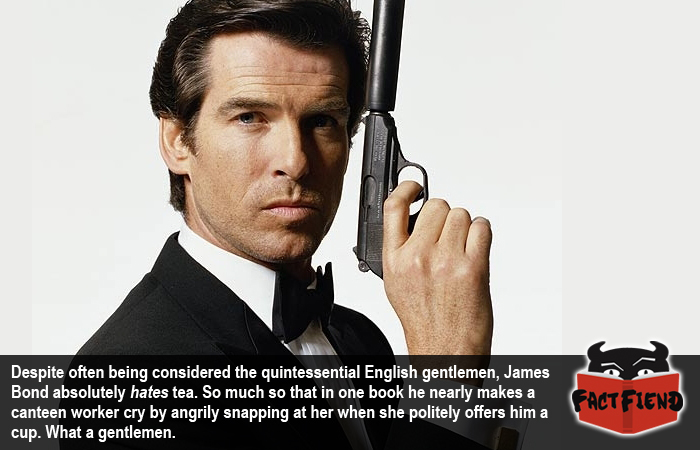 James Bond has never been more popular so we figured it was time to remind everyone that one of the most famous British fictional characters ever conceived, fucking hates drinking tea. In fact James Bond hates tea so much he acted like a total asshole to his secretary when she tried serving it to him that one time.

Yes, as weird as it is going to sound, James Bond, a man so British he probably pisses bulldog tears and Pimms, hates drinking the beverage 99% of the world associates with his homeland. But it’s not just the fact that Bond hates tea that’s so surprising, it’s how much venom he has for it and how willing he is to drop his unflappable gentlemen façade whenever its served or offered to him.

For example, in the novel Zero Minus 10, Bond is offered a cup of tea by his personal assistant, which he immediately refuses, stating “I avoid tea at all costs“. When his assistant jokingly comments on the fact that is a remarkably “un-English” thing for him to do, Bond snaps that he’d rather “drink a cup of mud.”. Which, well, kind of paints Bond as a bit of a dick, right? We mean, we hate coffee but we wouldn’t tell someone offering it to us that we’d rather drink a steaming cup of horse shit, which apparently makes us more polite and charming than a guy who spends 80% of his time in a tuxedo. 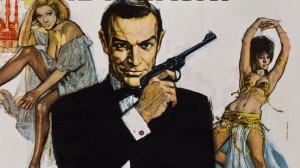 But we digress, in the Goldfinger novel, Bond makes an almost identical remark to a young girl working in a canteen, only instead of telling her he doesn’t like tea and that he’d perhaps prefer something else, he angrily yells at her for daring to offer him a cup of failure water. Stating:

“I don’t drink tea. I hate it. It’s mud. Moreover, it’s one of the main reasons for the downfall of the British Empire. Be a good girl and make me some coffee”

According to the novel, the sheer assholeness of Bond’s outburst ensures that everyone in the building hears about it and as a result, Bond is never again offered tea while working there. We should point out that this happens on Bond’s first fucking day working the night shift for the British Secret Service meaning he screamed into the face of someone he’d never met before, on his first day, because he didn’t want a cup of tea. Leaving us to wonder, after this outburst, just how many sets of balls did Bond have dipped in his coffee after this completely unwarranted outburst?

So why does bond loathe tea so much that he’d yell at someone pulling minimum wage like a big man? Well according to Ian Flemming who wrote the original novels, Bond’s dislike of tea is supposed to show that he’s a man of refined taste, because apparently there’s nothing more refined than being an asshole to people working in the service industry just because you can get away with it.

For more Bond facts, why not read about how Sean Connery spent a week getting shitfaced to get into character before he played James Bond on screen.