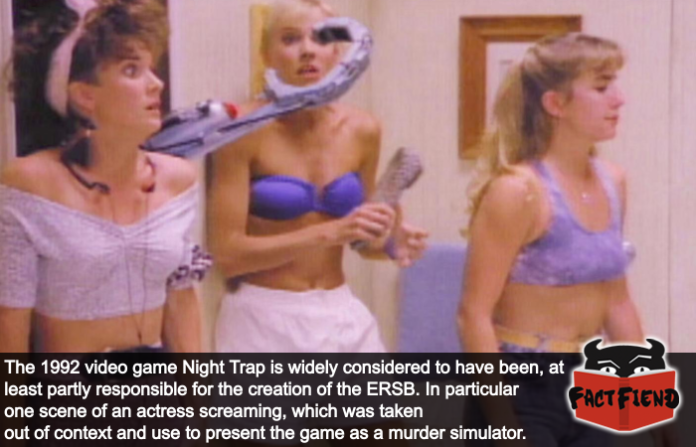 Video games have had a, shall we say, chequered history when it comes to their interactions with and portrayals within legacy media. Something that can be, at least, partially attributed to a single scene in the game Night Trap where a lady gets kidnapped by a bin bag vampire with a granny grabber. No, seriously.

Released in 1992, Night Trap was a video game developed at the height of publisher Sega’s attempts to brand itself as the edgy antithesis to Nintendo. Something that totally hasn’t resulted in Sega games and ads from the era ageing like warm milk in nuclear reactor mid-meltdown or anything. 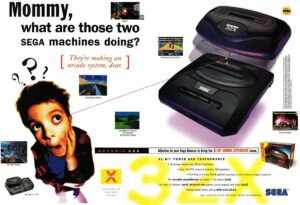 Anyway, the plot of Night Trap is a convoluted mess of ideas that’s about as incomprehensible as a Rubik’s cube in an industrial blender largely thanks to an edict passed down by Hasbro who partially helped fund the game. In short, the game was initially supposed to be an interactive movie about a bunch of teenage girls being besieged by an army of ninjas as they holed up in a hyper-futuristic turbo-mansion filled with traps and security cameras.

This idea eventually evolved to become more horror based, with the ninjas ultimately being replaced by vampires who wanted to suck the teenage girls dry like an blueberry Capri-Sun. However Hasbro poo pooed this idea, fearing kids playing the game would emulate the violence on screen forcing developed Digital Pictures to change the game’s enemies from vampires to “Augers”.

Essentially lumbering, nondescript monsters clad in garbage bags who moved with all the grace and finesse of a drunken grizzly bear trying to slap salmon out of the air. Also and again so that youngsters playing the game couldn’t emulate anything on-screen, the augers carried plastic hooks that sucked out a victims blood rather than biting them like a traditional vampire would. 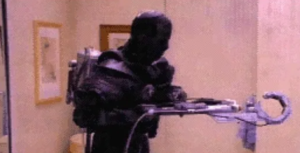 All in all the game ended up being a campy, B-Movie-esque experience filled with scenery-gnawing acting and comically flaccid special effects. Which didn’t stop the fucking U.S. Government getting involved and pointing to the game as an example of how video games were getting way too violent. Placing it alongside the likes of Mortal Kombat in actual highly charged Senate hearings that ultimately led to the creation of the ERSB.

So what gives? Well, despite the game being a pile of schlock no reasonable person could take seriously, there was one scene in which one of the game’s stars decided she wanted a Scream Oscar. 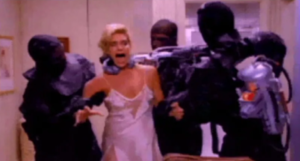 Now admittedly that screenshot looks bad, so it’s worth mentioning that this is one of several scenes showcasing what happened when you fail the game, as the whole point of Night Trap is to use various hidden booby-traps to prevent the aforementioned Augers from kidnapping the aforementioned down-to-party teenage girls.

Something nobody present at those hearings seemed aware of, with several congressmen openly (and falsely) claiming that the game was a murder-simulator that allowed players to graphically kill digitised women. The game didn’t, but it did admittedly really look like you could when they could play a video of 3 men dressed entirely in black dragging a screaming woman into a cupboard.

Meaning it’s entirely possible that the course of video game history could have been changed if that one lady decided to phone in a performance that day.