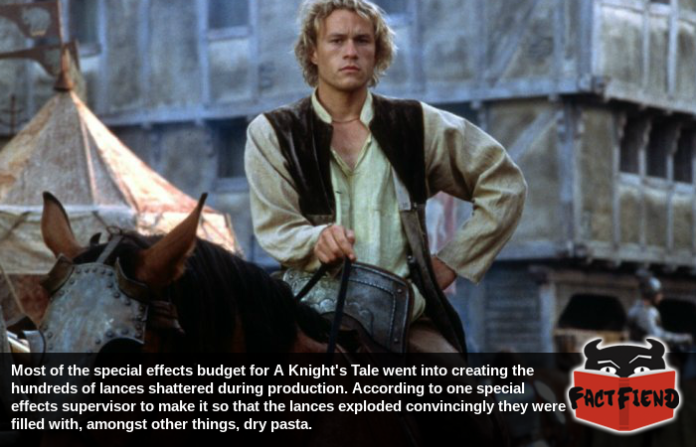 A Knights Tale is a film mostly famous for the fact it features a pre The Dark Knight Heath Ledger delivering endless lance-assisted face-slaps to a series of burly men in decked head to toe in plate steel. Face-slaps that were realised by utilising a combination of balsa wood and pasta.

You see, for anyone unfamiliar with the film, the basic plot is that Heath Ledger plays floppy-haired peasant boy who dreams of becoming a knight. To accomplish this Ledger’s character tells a series of big lies to convince people he’s actually a European noblemen called Ulrich von Liechtenstein and sets about learning to joust with, erm, mixed results. 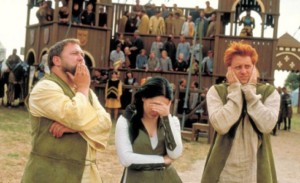 As you can probably imagine given that description, the film contains several scenes of characters rocking each other’s shit with big sticks from horseback. Scenes we should probably note several critics, well, criticised, arguing somewhat bizarrely that a film about a guy becoming a big-dick jousting champion contained too many scenes of people jousting. 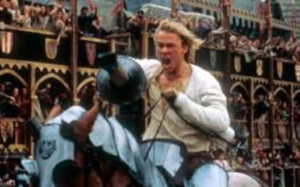 Now jousting is a pretty dangerous sport, so dangerous in fact that Heath Ledger is reported to have knocked out one of the director’s teeth just pretending to joust by accidentally slapping him across the face with a broomstick. Something that we’re guessing absolutely wasn’t funny at the time but is kind of hilarious in retrospect. 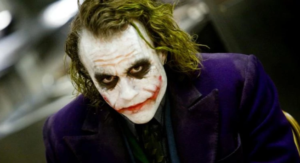 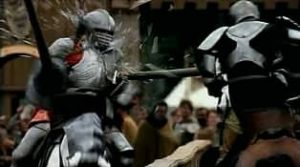 To accomplish this the lances were largely hollow to make them as light and easy to wield as possible and had strategic cracked placed along their length so they’d shatter almost instantly. However, this had the secondary effect of making the lances look kinda, unimpressive, when they collided with a stunt actor’s steel-clad head at Mach 3. To remedy this each of the hollow lances was filled with splinters of balsa wood. When this failed to make the lance explosions look explodey enough a bunch of dry linguine was also shoved in there.

According to the director, who remember took a broomstick to the face while making this movie, the original intention was to just add all of the splinters in post-production using CGI. To quote the director –

“We had the digital budget for splinters”

Rather than doing this though the decision was made to realise the splinters using practical effects because it would look cooler and also because pasta is cheaper is than CGI we guess.