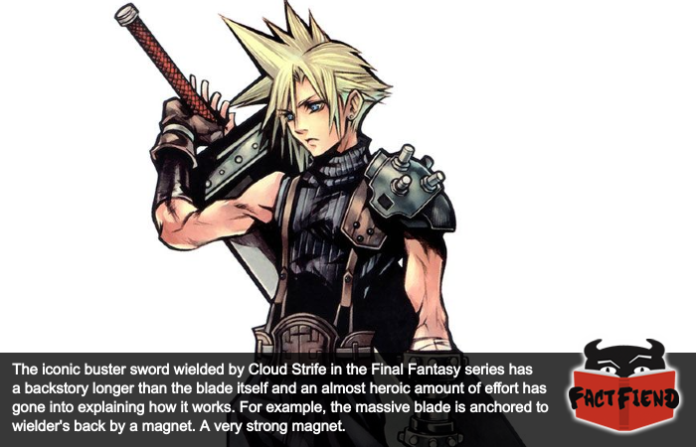 The Buster Sword is arguably one of the most eminently recognisable weapons from fiction and it’s not hard to see why. It’s a 6 foot long hunk of steel that looks unwieldly if not outright impossible to wield effectively. A fact that hasn’t stopped the series the weapon hails from trying super hard to explain why it actually totally makes sense you guys.

First it’s important to not that while the Buster Sword is largely known for being the signature weapon of Final Fantasy VII protagonist Cloud Strife, the weapon has appeared in many other forms of media. Most of which openly admit that it’s an absolute fucking unit of a sword that is stupidly difficult to lift, let alone swing around.

For example, the Buster Sword makes a bunch of appearances in Final Fantasy spin off titles and in each one descriptors such as “gigantic” and “difficult to transport” are used with many noting that the only person to ever wield it effectively was Cloud, the guy he got it from and the guy that, that guy got it from. Because, yeah, this sword has a backstory almost as long as the blade itself.

Anyway, despite the series of games the sword comes from dunking on the very idea of someone being able to utilise it in combat, an almost heroic amount of effort has gone into trying to explain specifically why Cloud Strife seems to be an exception and is capable of kicking so much ass with it. 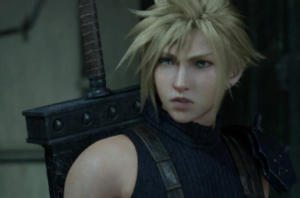 For starters a well-known nitpick from fans and casual observers of the series is that the Buster Sword seems to magically attach itself to Cloud’s back. Which, admittedly is a fairly common trope in video games but it’s especially egregious with Cloud because the weapon he’s attaching to his back is almost as big as he is.

Well according to in-universe lore, the sword contains magnets that attach to a special harness worn by Cloud. A feature present in early concept art of the character that was cut due to the difficulty of realising it with the limited graphics available at the time. 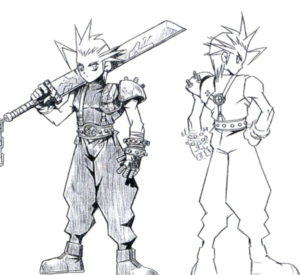 Speaking of the Cloud’s design, he notably sports a single pauldron covered in bolts in virtually every one of his appearances. A design quirk you could write off as being included purely to make Cloud stand out but does actually have an in-universe explanation. Specifically, it’s noted that Cloud removed the pauldron from his left shoulder to make drawing the massive Buster Blade easier and then bolted it to the other one. It just looks shitty because he’s a mercenary, not a blacksmith.

Of course none of this detracts from how dumb the Buster Sword looks, but it’s neat that they tried to explain it.