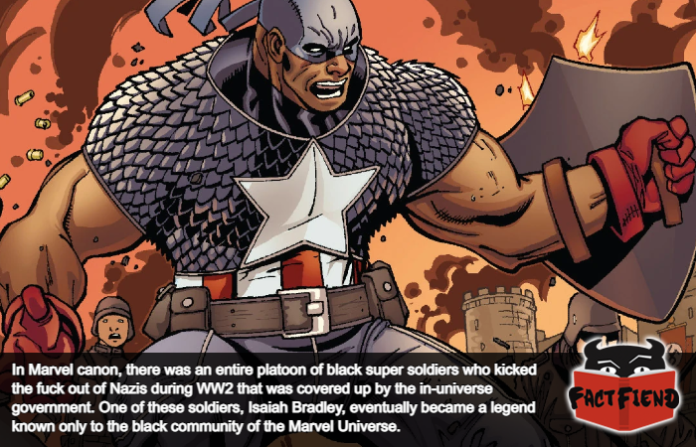 In the Marvel universe Captain America is a mantle donned by especially wide men who embody the spirit patriotism. Of the select few men deemed to be America enough to be, well Captain America, one of the most controversial, in and out of universe, is Isaiah Bradley. A man who despite being disavowed by his own government and sworn to secrecy about his role during WW2 was somehow known by seemingly every black person in the Marvel universe. Like, every single one.

Part of a clandestine program concocted by the American government to recreate the super soldier serum, Bradley was one of 300 black men forcibly conscripted into the secretive unit and coerced into undergoing a series of inhumane experiments to make him into the perfect soldier. While this sounds bad, Bradley was actually one of the luckier men forced to take part in the experiment because he not only survived, but came out of it wider than a car door. 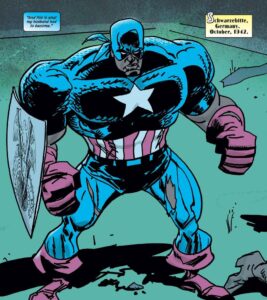 Now although the experiment was a success, Bradley was eventually arrested for treason after he stole a copy of Captain America’s costume and wore it while punting Super-Nazis into low orbit liberating a fucking death camp. The thing is, that mission was supposed to be a suicide mission intended to eradicate the last remnants of Bradley’s unit and him surviving, especially while dressed like the symbol of America pissed the government off so much that they put him in prison for life. With Bradley only being released after 17 years in solitary confinement after swearing himself to secrecy. Which is where Bradley’s story gets kind of silly.

You see, despite literally all records of his existence being scrubbed by the government pretty much every prominent black person in the Marvel Universe and ours somehow knows about him. For example, in one comic it’s revealed that everyone from Malcolm X to Muhammad Ali secretly visited Bradley to pay their respects but at no point ever bothered to let anyone outside of the, erm, blackvine, know that a bulletproof black man helped end WW2.

The same is seemingly true of the superhero community with virtually every black hero knowing about Bradley to the point he was a guest of honor at the blackest event in Marvel canon, the wedding of Black Panther and Storm. What make this so hilarious is that literally every black hero present is in complete awe at the sight of Bradley, much to the surprise of white heroes like fucking Wolverine, you know a guy who’s fought in every war in Marvel canon, who have absolutely no idea who he is. 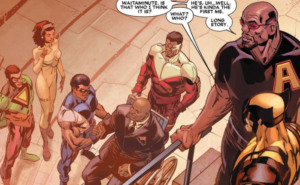 It’s also worth mentioning that because the Black Panther is a head of state, he has to invite all of his fellow world leaders which the writer used as an excuse to shit on George Bush. Which is kind of amazing considering the comic shows that the wedding was also attended by Dr. Doom as a ghost from Hell and people think that’s fine.