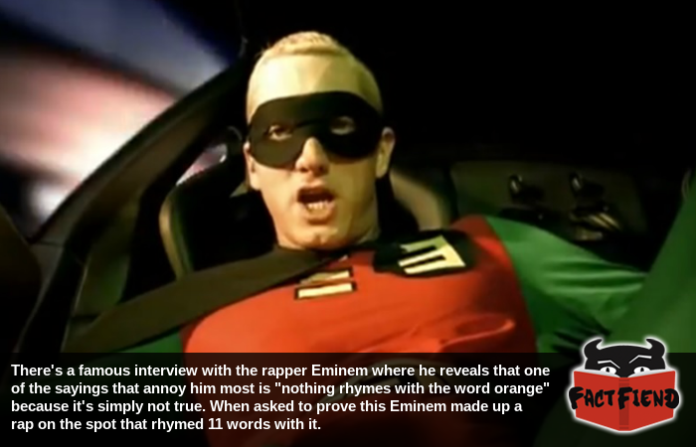 Despite being almost 50 fucking years old at the time of writing this article, Eminem has continued to excel in an industry otherwise dominated by much younger artists and shows no sign of slowing down. A fact that likely has a lot to do with the fact Eminem fucking loves words and music, so much so his favourite book is, believe it or not, the dictionary.

An enigmatic figure known for his tireless pursuit of perfection when creating music, Eminem is noted as being one of the hardest people to please in the entire industry due to his impossibly high standards. For example Eminem absolutely refuses to collaborate with people who uses ghostwriters and has been known to randomly test the rap abilities of people he’s working with by demanding they write lines or even entire verses on the spot. As an aside, Eminem’s dislike of ghostwriters seemingly extends to social media, or at least that’s what we assume based on this now legendary tweet sent by the artist a few years ago.

Speaking of modern technology, while Eminem has made strides to learn how to use it, he largely prefers to write all of his raps on paper and takes a highly methodical approach to crafting lyrics. So laborious is this process that Eminem can sometimes take upwards of several weeks to write a single line, which sounds kind of ridiculous until you learn about how seriously Eminem takes literally every syllable of a given sentence in one of his songs.

As revealed in an interview with Rolling Stone, Eminem likes to analyse every element of a sentence in an attempt to create as many rhymes as possible within it, usually bending the pronunciation of certain words to create new, never before heard rhymes for his songs. A habit the rapper developed as a teenager when he’d deliberately scour the dictionary for strange and unusual words to try and find ways to make them rhyme. Words he now uses while shitting on people from a great height in his songs. 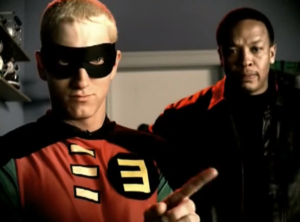 This was apparently one of Eminem’s favourite hobbies as a teenager and has resulted in him having arguably one of the most expansive vocabularies of any musician alive. Something the rapper proved and then some in an interview with Anderson Cooper where, in response to phrase “nothing rhymes with orange” came up with a rap on the spot that rhymed 11 words with it. An impressive feat of lyrical skill kind of overshadowed by the image of a tiny Eminem studiously pouring over a tome-like dictionary to find as many words as he could that rhymed with suck my asshole.