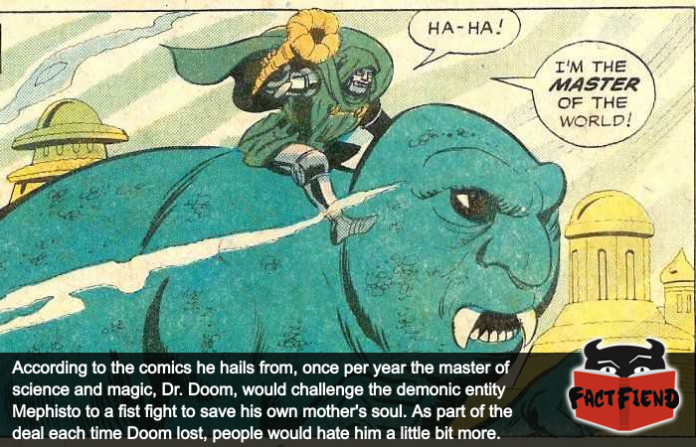 Victor von Doom is one of Marvel’s most famous and enduring villains. A towering presence defined by a continent-sized ego and an inimitable big-dick iron-plated swagger, Doom is not a humble man and he openly claims to be a master of all forms of science, technology and magic. An unrelenting pursuit of power largely informed by Doom’s desire to personally kick the living fuck out of the devil with his meaty, metal man feet to save his mother’s soul.

To explain, throughout his comic history Dr. Doom has been repeatedly shown to be one of the singular keenest minds in the entirety of the Marvel universe. Described in comic terms as a veritable “super-genius” Doom’s intellect knows no bounds and he is noted as being personally responsible for turning his home nation of Latveria into an economic superpower with nothing but the patents to the old and busted shit he doesn’t want to use to beat people up anymore.

Hell, the comics note that Latveria is considered to be a superpower on par with America simply because of Doom’s presence within it’s borders and the fact he considers it his personal duty to defend his land from outside threats. If that doesn’t sound impressive enough consider that Latveria doesn’t even really have an army, just a bunch of robots designed by Doom that look exactly like him meaning his country’s borders are protected by an army of identical looking robotic clones of himself.

So what does this have to do with Dr. Doom uppercutting the devil in his veiny red nutsack? Well according to the comics Doom has spent pretty much his entire life mastering every form of science and magic in an effort to free his mother’s soul from the sinister clutches of the demonic entity, Mephisto. As an idea how important this is to Doom’s backstory, the accident that resulted in him becoming an iron-plated dictator happened when he was building a machine that would let him visit Mephisto’s realm.

Anyway, according to the comics, Doom got his ass beat something fierce by Mephisto with the demon taunting the Baron of Iron and inviting him to come back for another beatdown the following year. A challenge Doom accepted, building machine after machine, each time getting ever closer to ultimate victory over the Lord of Temptation but never quite managing it. 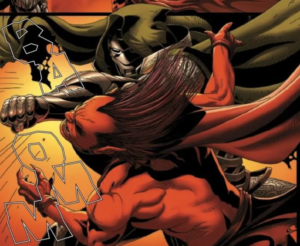 As part of these efforts, Doom spends his time between these annual fist fights training to kick Mephisto’s dick off. Which Mephisto seemingly finds amusing with the Demon King occasionally turning up just to taunt Doom by doing things like slapping his mother right in front of him.

As you might imagine, this annoys the shit out of Dr. Doom who eventually did manage to save his mother’s soul after striking up a deal with fellow doctor and Master of the Mystic arts, Dr. Strange. Tricking Mephisto into thinking he was betraying Strange, causing his mother to become so disgusted in her son that her soul is redeemed and sent to heaven.

A victory for sure but one that costs Doom any chance of ever speaking to his mother again. Unless of course Doom figures out a way to somehow also get to heaven and headbutt god hard enough to get her soul back from there too. Something we kind of think he could do with enough prep time.