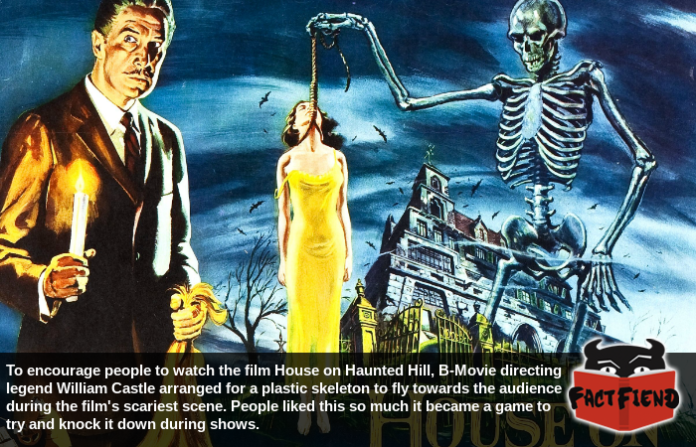 When it comes to making movies the difference between a success and a flop is very often how it is marketed. Something B-movie auteur William Castle knew only too well, which is why one of his movies featured a plastic flying skeleton that would try and spook the audience.

A veritable legend in the world of film and noted as being the favourite filmmaker of a number of big-dick directing types like Robert Zemeckis and John Waters, Castle is a name synonymous with low-quality but wildly entertaining B-movies. Many of which were huge successes as a direct result of Castle’s innate talent for the promotion of piss-your-pants scary movies. A skill admired by perhaps the most famous name in that genre, Alfred Hitchcock, who is known to have been directly inspired by Castle to make Psycho. 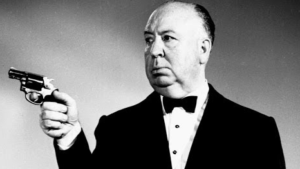 While most famous for the stunts he pulled promoting movies, Castle got bitten by the promotion bug while he was cutting his teeth in the world of theatre and he spied an opportunity to piss off some Nazis. You see, one of the first things Castle ever directed was a play he wrote in like 2 days starring a German actress nobody had ever heard of. A play we should note was huge success almost entirely due to Castle hustling like an absolute motherfucker.

The story goes that Castle randomly bumped into a German actress called Ellen Schwanneke after somehow convincing Orson Welles (yes, that Orson Welles) to let him lease his theatre from him. After convincing her to appear in a play at that theatre directed by him, Castle learned that foreign actors and actresses could only appear in plays written “specifically tailored to suit a foreign star” during peak theatre season.

Rather than admit defeat Castle told the theatre that Schwanneke was going to star in a translation of a German play called Das Ist Nicht Für Kinder by Ludwig von Herschfeld. The thing is, neither the play nor its author were real, Castle just made it up, which apparently didn’t matter because the theatre ate that shit right up. Now originally Castle wanted Schwanneke to appear in a imagining of the play Seventh Heaven but upon realising getting the rights would cost money, decided to just make Das Ist Nicht Für Kinder a reality, farting out a play and then translating it to German in just two days.

Castle then learned that Schwanneke had been invited to a play in Munich by Joseph Goebbels despite the fact she’d literally just fled Nazi Germany. Spying an opportunity to score some easy publicity, Castle wrote Goebbels and Hitler a letter on Schwanneke’s behalf telling them to go fuck themselves then “leaked” it to the press. A move that resulted in Schwanneke being dubbed “the girl who said no to Hitler” by the media and making the play a big hit with audiences who similarly agreed that Hitler could go fuck himself.

Stunts like these became a staple of Castle’s career and when he finally found his niche as a guy who farted out B-movies every few months, they soon became the biggest draw of of films he made. For example for one film Castle had assistants hand out life insurance policies to everyone who watched it in case they died of fright and for another advertised that he’d taken out a million dollar life insurance policy on the film’s star, Hercules. If that last one doesn’t sound like a gimmick we should point out that Hercules was a cockroach.

Not stupid enough for you? Okay so how about the film The Tingler, a film about a parasite that burrows into your brain and kills you and can only be stopped by screaming when you feel the tell-tale tingling in your spine, for which Castle arranged for some theatres to have large buzzers installed beneath a number of their seats that would vibrate at the film’s climax. As if that wasn’t hilarious enough, Castle had a scene in the film where the action stopped and the actor in frame turns and says to camera “the Tingler is loose in your theatre!” as the secret buzzers detonated whoever was sat in them’s asshole.

For another film Castle had the film stop as the heroine was about to enter the home of a homicidal maniac and tell everyone present that they could leave and get a full refund if they were to scared to see what was going to happen. The gimmick being that the person would only get the refund if they signed a form admitting they were a coward. Hell, Castle even arranged for some theatres to shine a yellow light on anyone and make them sign the form in a designated coward box.

For yet another film Castle allowed moviegoers to vote on whether or not the film’s villain would be punished or forgiven at the film’s climax by grabbing cards that were handed out in the lobby with a glow-in-the-dark thumb printed on it and waving it around with the thumb pointed either up (for forgive) or down (for punish) during a short break. If you’re wondering how in the fuck this was achieved, Castle only filmed an ending where the villain was punished, his reasoning being that the villain was so irredeemable that nobody would vote to save them. If you think this sounds harsh, we implore you to look at the villain and reconsider. 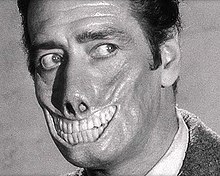 Perhaps the most famous gimmick though was the one Castle utilised in the film House on Haunted Hill. Specifically in the film there is a scene where a character is spooked into falling into a large vat of acid by their husband working in tandem with a plastic skeleton.

During the film’s theatrical run Castle arranged for the same type of plastic skeleton to emerge from somewhere in the theatre and fly along a rope at high speed directly towards the audience. A gimmick that sounds admittedly all kinds of stupid in retrospect but did have the intended effect of causing people to shit their pants in fear, at least the first time they watched it.

We say this because it’s noted that after audiences caught wise to the gimmick, many would buy tickets to see the film just to try and knock the skeleton down by throwing things at it. Something Castle didn’t mind because it meant they had to buy an extra ticket.