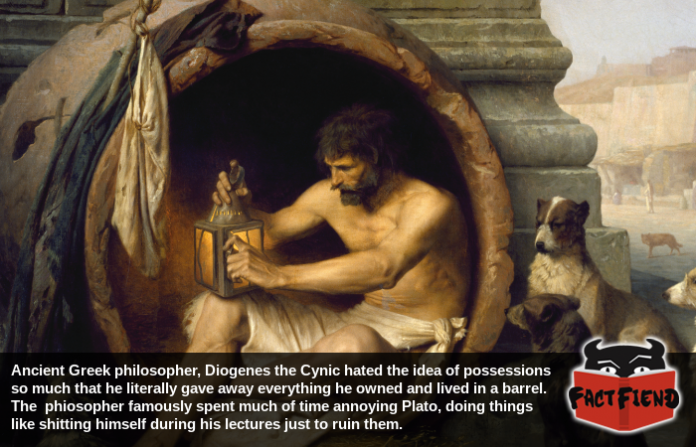 Continuing with our sporadically updated series singing the praises of people and the occasional animal that possess neither the ability nor inclination to give what is commonly known as “fucks”, today is the turn of Diogenes the Cynic. An ancient Greek philosopher who spent almost his entire life telling everyone he met to suck the majority of his freely hanging dong.

Alternatively known as Diogenes of Sinope, the famed philosopher was legendary in his own time for the apparent total lack of shits he gave about pretty much everything. The story goes that after being banished from the city of Sinope for defacing a bunch of coins, Diogenes moved to Athens and from that point on willingly opted to live a life of abject poverty.

To this end Diogenes gave away or simply tossed literally everything he owned save for some rags to cover his dong and a small wooden bowl that he used to eat out of. Diogenes eventually got rid of the bowl after seeing a homeless child drink water from their cupped hands and realising that bowls were bullshit. 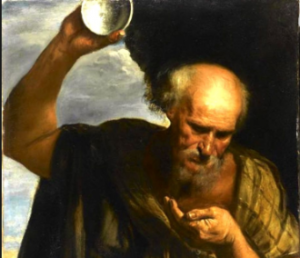 Diogenes mostly begged to pay his way, but wasn’t above just eating food he found in the trash or that people dropped on the floor. The philosopher also slept wherever the fuck he felt like, sometimes lying down in the middle of the street in the middle of the afternoon if he felt like napping. As if that didn’t sell how little Diogenes cared what others thought of him, he was also apparently quite fond of masturbating whenever he felt the urge to do so regardless of where he was and would respond to criticisms of his appearance or actions by whipping out his dick and pissing on people.

Speaking of bodily functions, Diogenes felt that bathrooms were too much of an indulgence and as such would reportedly just pop a squat and squeeze out a shit mid-conversation if he felt his stomach rumbling. Diogenes’ habit of randomly shitting wherever he felt like saw him enjoy a kinship with dogs, whom he felt were superior to man because they, like him shit and ate whenever they felt like as well as seemed to know whether someone was a friend or foe. Dogs in turn seemed to like Diogenes and could often be found sleeping half naked in the street surrounded by dozens of stray dogs who were similarly incapable of giving half a shit about what was going on around them. 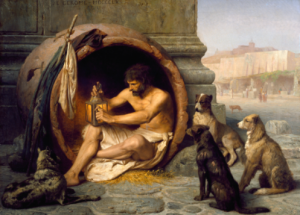 Although he actively avoided most indulgences, Diogenes did afford himself a single luxury in the form of a large barrel that he occasionally lived inside of when the weather was especially hot or cold. At other times Diogenes would sleep inside of a large jar owned by a temple, much to the amusement of locals who came to see the philosopher as something of a weirdo. Diogenes disliked this, telling people who called him mad that he simply thought differently to them.

Well known for his philosophical stunts, Diogenes would occasionally walk around in public during the daytime carrying a large lamp which he’d shove into random people’s faces. When asked what the fuck he was doing Diogenes would respond with a wry smile, “looking for an honest man.” 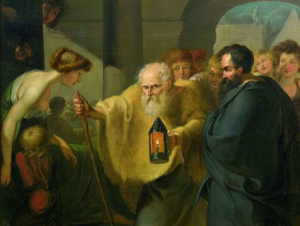 Diogenes’ wild-man beard and habit of walking around half-naked belied his keen philosophical mind with many prominent philosophers coming to begrudgingly respect him for his intellect and wit. The legendary Plato was one such philosopher, which must have annoyed Diogenes who is known to have greatly disliked Plato because of how he’d interpreted the work of Socrates.

Diogenes hated Plato so much that he devoted a frankly heroic amount of time to annoying him and it’s noted that Diogenes would never miss an opportunity to fuck with the philosopher. For example it’s noted that Diogenes would frequently attend Plato’s lectures just to argue with him or generally dick around, doing things like eating loudly in the front row or taking a shit on his seat before leaving. On another occasion after Plato defined a man as a “featherless biped”, Diogenes plucked a chicken, brought it to one of his lectures and loudly proclaimed “look, I have brought you a man!” An embarrassed Plato quickly added “with broad flat nails” to the description.

Stunts like this coupled with Diogenes’ reputation of bizarre behaviour saw him earning the kudos of none other than Alexander the Fucking Great who whilst visiting Corinth insisted upon meeting the crazy philosopher he’d heard so much about. According to legend Alexander approached Diogenes while he was lazily sunning himself in the street and after introducing himself asked him if there was anything he, the mighty Alexander could do for him. Without turning his head Diogenes responded “Move out of my light.” A statement that so amused Alexander he is said to have quipped “If I were not Alexander, then I should wish to be Diogenes.” To his men. Never one to miss an opportunity to dunk on someone a second time Diogenes shot back, “If I were not Diogenes, I would still wish to be Diogenes” before going back to tanning his balls. 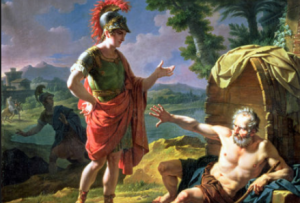 Even in death Diogenes continued to display a proficiency in non-fuck-giving, telling a person asking him what he wished done with his body when he died to simply throw his body over the city’s walls so the wolves could eat it. When asked if this is really what he wanted an annoyed Diogenes left additionally instructions to have his body given a large stick to fight off the wolves. When it was sagely pointed out that he wouldn’t be able to fend off wolves with a stick when he was dead, Diogenes snarkily replied “If I lack the ability to use a weapon when dead, would I really care what happens to my body?” or something to that effect. Meaning yes, Diogenes used his own death as an opportunity to tell people to fuck off one last time.