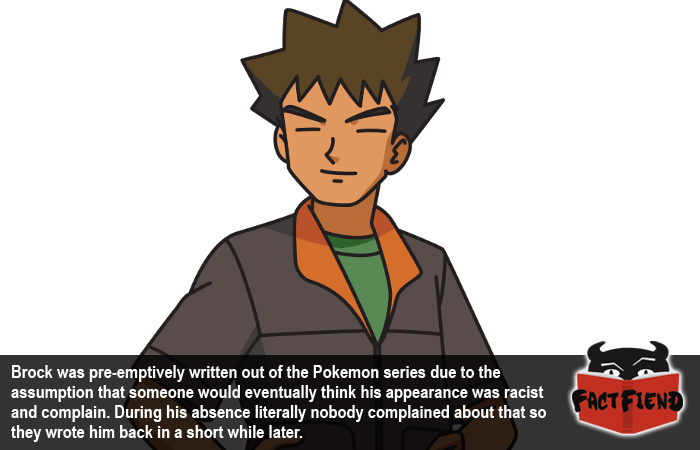 Brock Harrison (yes, that’s his last name) is one of the most popular and enduring characters from the Pokemon series, curiously though, the character was written out of the show for a totally baseless reason. By which we mean the producers were afraid that people would think that Brock’s character was massively racist.

To explain, according to an interview with Masamitsu Hidaka, a storyboard artist for the original anime series, when the show first began to gain traction in the West, the crew behind it were worried that someone would take offence to Brock’s character, in particular his eyes, which some felt could be perceived as racist.

If you’re not sure why Brock’s eyes could be perceived as racist, we’d like to know where you live because it sounds lovely. For everyone else, before you roll your eyes at the thought of these overly sensitive Japanese executives pre-emptively censoring something just in case, keep in mind that this was before Pokemon became a global phenomenon and way before it could get away with fucking anything.  They had to stay on their toes when it came to something that could cause offence or controversy.Especially when that thing was a guy with literal slants for eyes.

The puzzling thing is though, the controversy never came, according to Hidaka nobody in America, the west or anywhere for that matter ever complained about Brock or his eyes, however, just to be on the safe side, they introduced a tall white character to replace him anyway.

After introducing this new character and gauging the reaction of fans, something became distressingly clear, people loved Brock and no one gave a shit about his eyes or how unintentionally racist they might be. In fact, there were more complaints about him being written out of the show than there were about his eyes (a grand total of zero), meaning that technically, infinite more people were pissed off about him being written out of the show than were ever offended about his characterisation or appearance. Which we guess is a good lesson for us all, it doesn’t matter if your character is potentially offensive, as long as they’re awesome.

And here’s the kicker, according to the same interview in which it was revealed that Brock was written out of the show in case he was found offensive, it was also noted that the show kept introducing new female characters because “it gives the boys some new eye candy every once in a while“. Wait, why weren’t people offended about that?