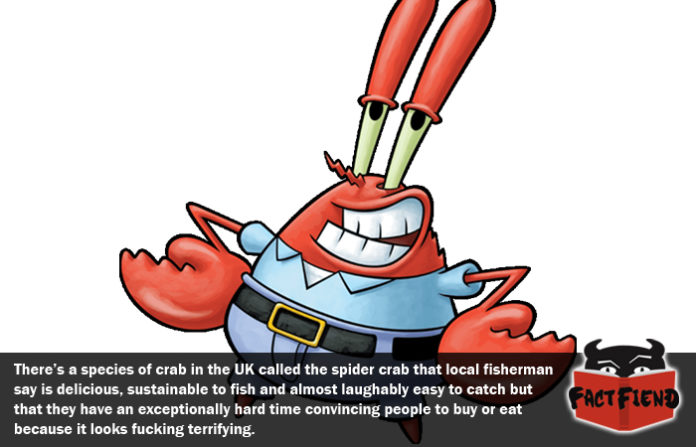 These days fisherman have a rather sizeable hard on for fish that can be caught sustainably since it helps the environment and gives them the ability to earn potentially infinite money. Over in the UK though there’s one creature fisherman can’t seem to sell, spider crabs.

As you can probably tell from their name spider crabs look like a spider that levelled up to lv99 in an RPG and put all of its experience points into armor upgrades.

Though nowhere near as large of intimidating as their Japanese cousins which can grown several feet wide and look like they wouldn’t be out of place in a Dark Souls game, they can nonetheless grow over a foot wide and look all kinds of fucked up when you get really close.

Which is kind of a shame because according to fisherman these things are like, piss easy to catch and are supposedly all kinds of tasty. Spider crabs are plentiful, full of delicious tender crab meat and most importantly of all can be caught in a low-impact way that doesn’t damage the environment.

The problem is, at least in the UK, there’s no market for the crab because nobody wants to eat something that looks like it eats the souls of disobedient children and communicates via screams. This means that fisherman only catch a handful of the actual population that exists, selling them to specialist stores and foreign countries where they apparently relish the chance to devour such an evil looking creature.

In fact fisherman have made repeated attempts to introduce the crab to British tables, insisting that if people could just get past the fact they look fucking terrifying, they’d realise that they go great with garlic butter. This has gone about as well as you’d expect and the British public on the whole has expressed no desire to eat spider crab, meaning the population continues to go unchecked, growing in size and numbers below the British ocean.