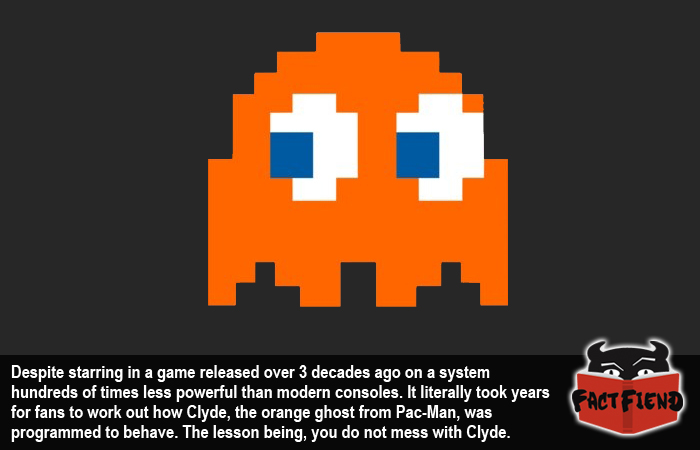 Inky, Binky, Pinky and Clyde from Pac-Man rank as some of the most iconic characters in video game history and part of what helped them achieve that level of fame is there frankly astonishing level of AI. Think we’re over exaggerating? It took people decades to figure out how their little ghost brains work.

One of the reasons Pac-Man became an almost instant hit when it landed in arcades in 1980 was a combination of its cutesy visuals (which were specifically tailored to appeal to all you lady-folk out there) and its surprisingly punishing level of difficulty. Players pumped literally billions of dollars in quarters into Pac-Man machines across the globe and it took until 1999 for someone to “perfect” the game. Perfect in this case meaning completing all 256 levels without dying and without missing a single pellet. Just let that soak in, it took 19 years and literally millions of hours of play for someone to beat this game, for comparisons sake someone managed to beat Dark Souls 2 (a sequel to one of the “hardest games of all time”) the day that it came out.

The amount of time people have spent playing this game is staggering, which only makes the fact that it took years for people to actually realise what the hell the 4 fabulously well coordinated ghosts were doing all the more insane. We didn’t actually know how the ghosts were programmed to behave until Tōru Iwatani, the guy who effectively created the entire game, explained it in an interview. In 2011!

Even then, when it came to describing how Clyde, the orange ghosts moved around the board in relation to Pac-Man, the only thing Iwatani would say was that “the orange ghosts moves completely at random”. Which fans knew wasn’t true, because it’s impossible to program a computer to act truly randomly, because the nature of programming behaviour means that there is some intrinsic rule it has to follow. It wasn’t until fans ripped the game’s code apart themselves that it was discovered that Clyde was programmed to always try and be within 8 spaces of Pac-Man, but run away if he got too close.

That behaviour may sound simple, an in comparison to modern games, we guess that it is, but just keep in mind that it took us about 30 years to figure it out. Clyde truly is a mystery wrapped in an enigma wrapped in pixels.