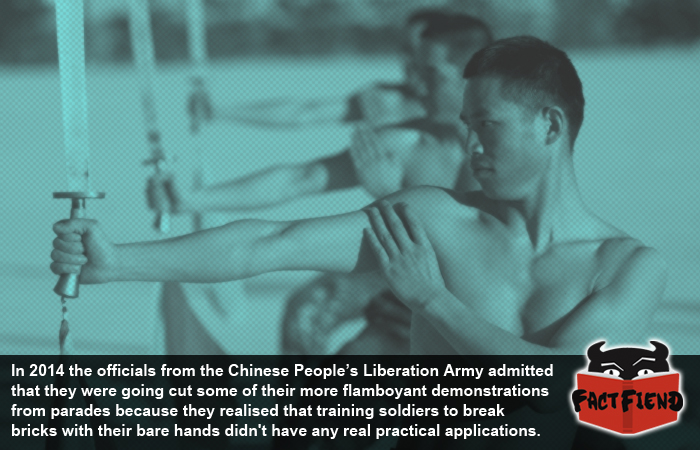 It’s estimated that China currently has one of the largest and best equipped armies on Earth with over 4 million soldiers and enough missiles and bombs to put a sizeable, dick-shaped dent in the moon. Also each of their soldiers can also punch a brick clean in half. Or they could until the Chinese government decided that training its soldiers to slap concrete to dust wasn’t an effective use of its time.

For anyone out there who thinks we’re in anyway being hyperbolic when we say that Chinese soldiers can shatter bricks with various pieces of their anatomy, here’s a picture of a soldier exploding a handful of bricks with his head with a little help from a friendly sledgehammer that is in no way Photoshopped.

The thing to keep in mind while looking at this photo, other than that, that guy in it is a fucking baller, is that this is the sort of thing China trains all of its soldiers to do. The guy in the above photo isn’t part of some elite Special Forces unit where they’re expected to be able to headbutt their way out of POW camps or something, he’s a regular soldier who just drew the short straw for demonstrations that day. The best part is, this isn’t even the most insane thing the People’s liberation Army expects its soldier to be able to do, for example here’s a picture of a soldier John McClane-ing his way through a currently on fire window in full uniform and an unreasonably bitchin’ hat.

Now obviously the first question that leaps to mind after front-flipping through an explosion in full combat gear is, why? And the answer is pretty simple, because it looks fucking awesome. The Chinese government knows that this stuff is pretty useless on the battlefield, but trains its soldiers to do it anyway because who the hell would mess with an army full of soldiers who deliver a pin-point accurate missile dropkick, through a flaming window?

That all changed in 2014 though when Chinese military officials realised that the time they spent teaching soldiers to throw needles through plate glass windows and change the tires of a motorcycle side car while it’s still moving could probably be better used teaching more, practical skills to soldiers.

As a result of this change, recruits in the PLA today aren’t taught nearly as many sick-ass kung fu moves as they were historically, with particular emphasis being placed on more traditional military skills like sniping and strangling people with piano wire. The downside to this is of course that we can no longer say that there’s an army out there of soldiers who could destroy a building by all punching exactly one brick at the same time. Which is just awful. Also it means China’s military is way stronger and scarier now, which is probably also bad.

For more military hilarity, why not read about that time the US military used 27 helicopters to cut down a single tree.