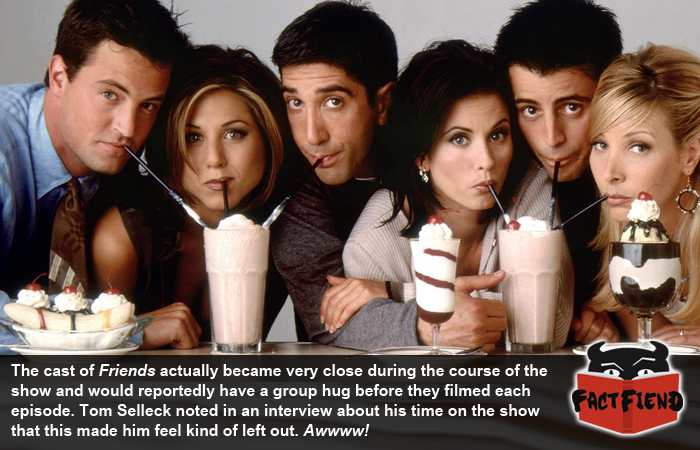 Like a bunch of our other articles, this article now comes in video form and includes a bonus section about why the character Ross can go fuck himself.

If you prefer words to pictures and video, the original article can be found below.

The show Friends is a bona fide pop culture phenomenon and with rumors of a Friends movie being constantly circulated online and then shot down by the cast immediately from their golden sky-limos, we figured we’d pick everyone up by sharing a few facts about the cast of Friends, or more specifically, how adorable they were.

Before the show ever made it to air, David Crane, the co-creator of the show was insistent that it would feature a “pure” ensemble cast, for the uninformed, an ensemble cast is defined as a show or movie where all of the cast members are given a roughly equal amount of screen time. While many films and TV shows have featured ensemble casts in the past, they almost always feature one character who inevitably steals the spotlight by being more awesome than everyone else on-screen. 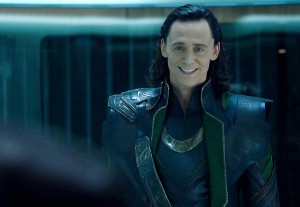 Crane and his co-creator Marta Kauffman were incredibly keen to avoid this and specifically structured each episode so that it wouldn’t focus on one character or one pair of characters, instead choosing to focus on the gradually evolving relationships of all six characters.

What nobody expected though was for the cast themselves to get on board with the idea of working as a team instead of 6 individuals. For example, in the first season, all of the cast members were paid the same amount per episode. This all changed during the second season though and both Jennifer Aniston and David Schwimmer who played Rachel and Ross respectively were paid more than their cast members, presumably due to their character’s relationship being a focal point of that season and because fuck Joey we guess. 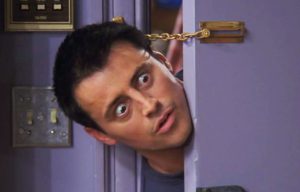 When the third season rolled around, the cast made the unusual decision to enter salary negotiations as a group instead of individually, much to the surprise of Warner Bros. After tense negotiations the cast agreed that all of them should be paid the same amount and to ensure this, Schwimmer and Aniston both agreed to take a substantial pay cut. The cast then doubled down on this decision by then agreeing to only discuss their salary with executives as a group, resulting in each of them being paid the same amount per episode for the remaining 7 seasons.

At first this decision likely saved Warner Bros money because it meant they could pay the most famous stars at the time, Aniston and Schwimmer, less. However, as the show got ever more popular, eventually becoming one of the most watched shows on television at the time, every time a new season rolled around they inevitably had to raise everyone’s salary to stop them all from walking.

This wasn’t all though, to ensure that no single friend would ever receive more publicity, the cast agreed that all interviews and publicity photos linked to the show had to feature all 6 of them. A decision that was later reversed by Warner Bros when they realised they couldn’t fit everyone’s rapidly swelling heads and egos into a single room.

As you can imagine, the sheer amount of the time the cast spent together led to them all becoming friends off-screen and according to sources who worked on the show, they would begin each episode with a group hug during which they’d wish each other luck. As we noted at the start of this piece, this had the unfortunate effect of making guest stars on the show feel uncomfortable or in the case of Tom Selleck, just plain left out.

So, the next time you watch an episode of Friends, just remember that before they filmed that episode, all of them shared a big hug while a giant, moustachioed man wept quietly in the corner.