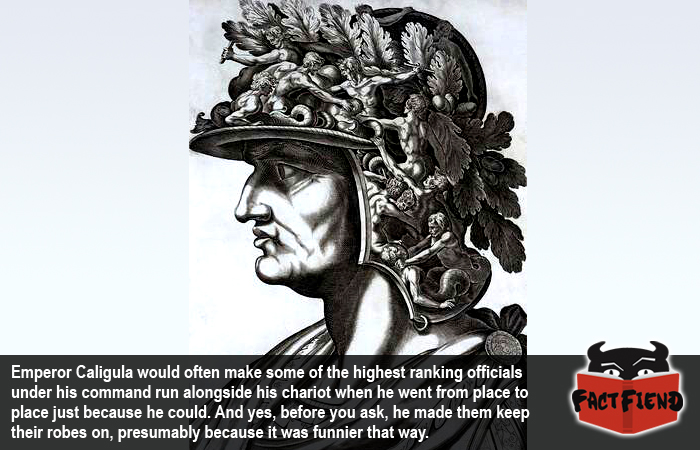 Caligula is a name synonymous with depravity and mindless, wanton acts of violence, we’re not going to defend Caligula because he was a Grade A, 24 carot asshole with a dipshit accessory pack. However, amongst the stories of unthinkable cruelty and torture, there are some nuggets of pure comedy gold. Like all those times Caligula made his senate run alongside him for a joke.

Though he’s mostly known for his tyrannical bouts of rage and his habit of randomly murdering people whenever he felt like it. At the start of his rein as emperor, Caligula was a pretty popular dude and the Roman public positively adored their new, sexy emperor, showering him with gifts and sacrifices. In response, Caligula lowered taxes, gave his predecessor a gigantic funeral and then re-built the houses of people who’d recently lost them in a fire.

However, after just a few short months of having absolute power and unlimited wealth, Caligula’s suddenly, out of nowhere began acting like a total dick-face. Since we like to keep this site light, we won’t discuss the more, uncouth activities Caligula engaged in, all we’re going to say is that the guy really loved his sisters. Sexually.

One thing Caligula seems to enjoy more than the company of his sisters was playing stupidly childish pranks just to see how people would react. One story describes the emperor throwing tickets to a show onto the street just to see how many people would turn up and another involved him making his horse part of the senate just to annoy them.

Annoying the senate was one of Caligula’s favourite pastimes, as described above, Caligula would make his senate run alongside him while he was enjoying a ride in his chariot for miles at a time, in their senate robes, just to piss them off. He’d also make them stand at the end of his table wearing just a tunic while he ate his dinner (which usually consisted of flecks of gold sprinkled on his everything).

None of this changes the fact that Caligula was an objectively awful human being, but you have to admit it’s pretty funny that he once made a bunch of politicians run behind him just because he could.