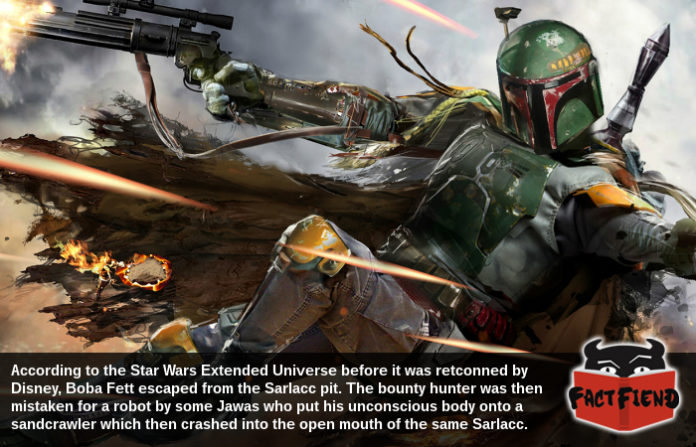 With his blaster-proof Mandalorian armor, bitchin’ jetpack and wrist-mounted rocket launcher, Boba Fett is considered to be the premier bounty hunter of the Star Wars universe. You know, even though he doesn’t do a single god-damn thing in the original trilogy except helplessly fall into the open mouth of a Sarlacc. Well the Expanded Universe tried to correct this by explaining that Boba Fett escaped the Sarlacc’s gaping maw before promptly falling right back into it.

When Disney bought Stars Wars they deleted every fucking word of the Expanded Universe so that they wouldn’t be hamstrung by the convoluted canon George Lucas created over the last 30 years when making their own movies. While this was probably a good call overall, it does mean that Boba Fett is now canonically the shittiest character in the franchise.

You see, the internet has a massive hard on for Fett even though he doesn’t actually do anything. In fact, Fett has a grand total of five lines of dialogue throughout the entire original trilogy and his first appearance was in that shitty Star Wars holiday special George Lucas tried to erase from history.

As if that wasn’t bad enough, Fett has arguably the most embarrassing death in the franchise, being killed by his own malfunctioning jetpack after being beaten in hand-to-hand combat by a blind Han Solo before flying directly into the open mouth of a completely stationary creature.

For some reason though fans seemed to like Boba Fett and a lot of them couldn’t handle the fact he’d been killed by a big sand vagina. Enter the Expanded Universe. According to the various novels and comics published after Return of the Jedi Fett survived falling into the Sarlacc pit through a combination of his rad armor and we presume, his massive, pendulous dong.

Apparently though writers couldn’t resist dunking on Fett one last time because according to the Expanded Universe the legendary bounty hunter fell into the exact same Sarlacc pit again a few days later after being overpowered by some Jawas. But wait, there’s more because it’s also noted that Fett was only able to escape when his jetpack malfunctioned again and caused an explosion that threw him to safety.

So to recap, in one week Boba Fett, the self-described greatest bounty hunter in the galaxy, was beaten in a fist fight by a blind guy and some 3 foot tall aliens and then went right ahead and fell into the same giant hole twice. We’re starting to suspect Disney deleted the Expanded Universe just to spare his feelings because it’s less embarrassing that he only fell into the Sarlacc once.