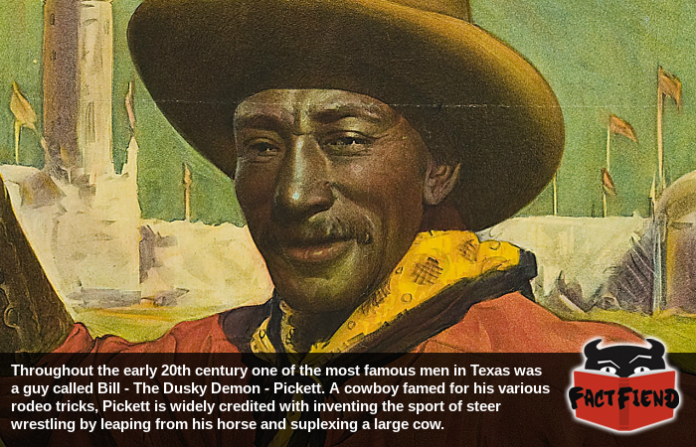 If out of context Jackass clips and Looney Tunes shorts have taught us anything it’s that you don’t fuck with an animal with horns. A lesson famed cowboy Bill Pickett seemingly never learned given that he invented a sport that involves wrestling them to the ground.

The second child of former slaves, Pickett wasted no time as a youth honing his body into a veritable weapon of bovine destruction, leaving school after finishing the 5th grade to pursue a career in ranching. During this time Pickett learned all he could about ranch life, becoming by all accounts, an expert horseman and consummate badass by the time he matured into the man people would come to know as, get this, the Dusky Fucking Demon.

During his time as a ranch hand Pickett spent much of his time observing the various large bumbling animals to call it home, in particular the longhorn steers. You see, Pickett noticed that other hands had trouble controlling these animals and that they basically did whatever the fuck they wanted. Hardly an ideal scenario when dealing with an animals with horns that wouldn’t look out of place on a creature you’d hunt in a Monster Hunter game.

Curious to see if there was a better way to control these mammoth creatures, Pickett noticed that bulldogs sometimes used to herd the steers could wrest them to the ground by biting their bottom lip. Pickett reasoned that if a dog could bring a steer to the ground then surely a man with large enough balls could do the same thing.

After practising on cows that didn’t have medieval lances stuck to their head, Pickett perfected the technique required to bring them to the ground. What was this technique you ask? Well, to put it simply Pickett would ride a horse as hard as he could until he was alongside the animal, at which point he’d leap onto it, presumably while screaming something awesome. 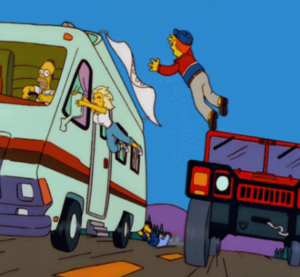 After steadying himself using the steer’s own horns, Pickett would swing around to the front of the animal and bite its fucking face. Once the steer was suitably enraged Pickett would then pull back with all his might, forcing the steer to flip over onto the ground. Or to put it another way, Pickett was able to stop 1000 pounds of rampaging bovine fury by suplexing it into the dirt.

As you can imagine, people were very keen to witness this feat for themselves and Pickett made quite the name for himself showcasing his steer-suplexing skills across America. As with most things, before long there were imitators trying to similarly cash-in on the frothing public demand to see large steers being emasculated. Something that eventually evolved into the sport of bulldogging or steer wrestling. A sport Pickett utterly dominated until he was died by being kicked in the back of the head by a horse. Because lets be honest, after everything you’d read do you really think anything less could have killed a man who willing dove headfirst into rampaging cows with organic knives on their heads?