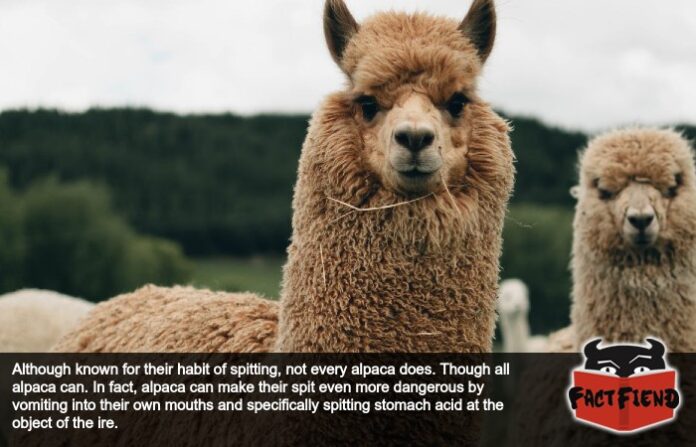 Alpacas, which are often confused with their larger, fuzzier genetic cousin, the llama, are fluffy and most importantly wuffy creatures that hail from South America. Although pretty chill as far as big-ass camel-like creatures go, alpacas are known to spit if they’re sufficiently pissed off. Spit they can direct with unerring precision and season with acid if they feel like it.

Curiously although spitting is arguably the most well known and infamous habit of alpacas, it’s not something all of them are known to do. To be clear, this doesn’t mean that some alpacas can’t spit, it’s just that the choose not to for whatever reason. Conversely, some alpacas will spit for seemingly no other reason than you shouldn’t have fucked around and found out. A behaviour we don’t condone, but do understand and in a small way, respect. 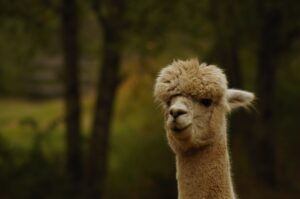 Moving on, the reasons for spitting vary between alpaca but the most commonly cited reason given by experts on these impressive fuzzy camelids is that they do it to either establish dominance or express distaste for something. Which well, makes sense. 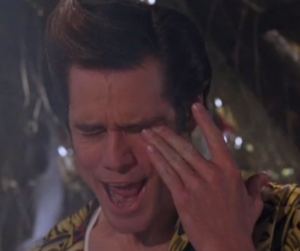 What few people realise though is that alpacas have different types of spit that are used to express varying levels of annoyance. For example, the most common type of spit is noted as being mostly air and whatever saliva the alpaca has in its mouth and is largely used as a warning. While unexpected and off-putting these shotgun blasts of alpaca breath and spit are largely harmless. However, the same cannot be said of the the trump card in the alpaca spit arsenal, vomiting into it’s own mouth and spitting that out instead.

This literal projectile vomit is not only incredibly foul smelling but can be directed upwards of 10 feet away with almost pinpoint accuracy. It gets worse though because this mixture of vomit and saliva is not only mildly acidic, but bright green as a side-effect of the alpacas almost entirely grass-based diet.

Now while admittedly the the danger posed by the spit is limited, it is capable of causing lasting, permanent damage. To the alpaca. You see, if an alpaca utilises this forbidden alpaca technique too often, it’s own lip will start to melt away and droop down due to the abundance of acid being force through it. Which is ironically kind of metal for an animal that looks like it’s made of clouds.