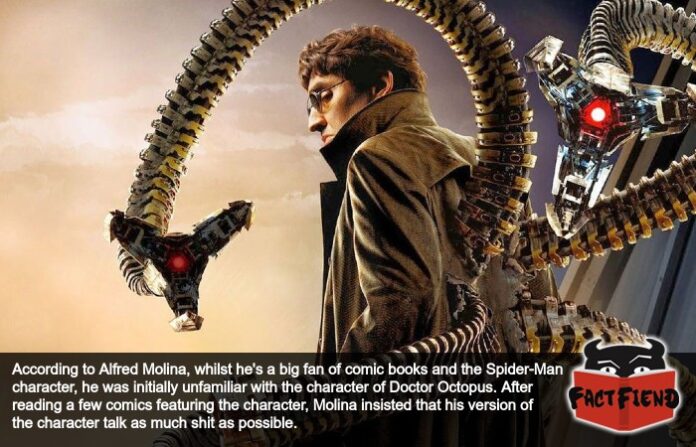 Spider-Man 2 is a movie carried by the performances of its leads, with the performance of Alfred Molina as Doctor Octopus being especially noteworthy. In part because it’s fucking awesome but largely because Molina insisted that his version of the character shit-talk Spider-Man at absolutely every opportunity.

Prior to being cast as Doc Ock, Molina was an admitted fan of the original Spider-Man comics and was reportedly thrilled to be cast in the film. The only problem was, Molina had never actually read any comics featuring the character he was set to play and decided to correct that by reading a shit ton of comics starring Doctor Octavius. 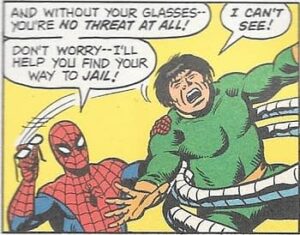 While doing research on the character Molina realised that in addition to being one of Spider-Man’s most memorable foes, Doctor Octopus was a world-class shit-talker. With Molina describing the character as having a “wonderful kind of slightly sardonic, almost cruel sense of humor“. Something he wanted emphasized in the film, bending the ear of director Sam Raimi to ask for more moments of his character being a giant swaggering dickhead and loving every single second of it.

A request Raimi was happy to agree to, feeling that a more, shall we say, theatrical villain would be a good change of pace after the utter fucking insanity that was Willem Dafoe’s scenery-chomping Green Goblin performance. 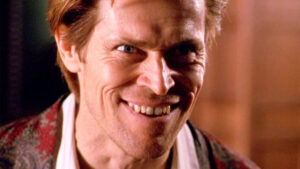 To this end, Molina spent much of his time on set joking around with his co-stars which, believe it or not, included the giant prosthetic tentacles worn by his character. In fact, according to the puppeteers in charge of the tentacles (whom Molina became good friends with during production) Molina spent a lot of time playing off the tentacles between takes to the point he even had pet names for them. For the curious, the tentacles were called Larry, Harry, Flo and Moe.

A habit of Molina’s that actually ended up making it into the film, with the puppeteers earning a lot of praise from the actor for how realistic and eerily human they made the movements of the tentacles feel in scenes where he had to act across from them. Which admittedly was hard to noticed on a first watch of the film because we were too busy watching Molina say quippy one-liners while whipping civilians across the Manhattan skyline.