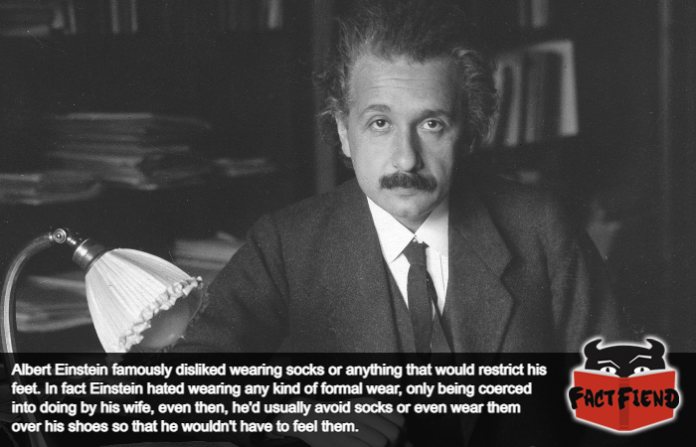 Renowned physicist and known non-giver-of-fucks Albert Einstein accomplished a lot during his lifetime, most of which he disliked talking about. In fact, Einstein disliked a lot of things but mostly he disliked socks. So much so that he’d rather wear them over his shoes if he attended an event they were considered mandatory.

Now when we say Einstein hated socks we mean the man harboured a literal lifelong grudge against the garment that started during his childhood in Eastern Europe. Specifically during the regions infamously chilly winters that frequently saw his socks little piggies breaking free of their cotton prison and near-freezing to death on an alarmingly frequent basis. Something that eventually resulted in mini-Einstein swearing off socks, forever. 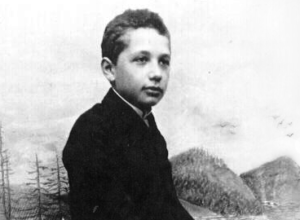 Part of Einstein’s frustration with socks lay in the fact that he had really shitty feet, like, really really shitty feet. As in, feet so bad they got Einstein out of military service. With Einstein reportedly suffering from flat feet and varicose veins which caused him near-constant, agonising pain. So it’s not like Einstein didn’t have a reason to dislike socks.

However, this is Einstein we’re talking about so people kind of expected a certain level of decorum from a verified turbo genius like him, which resulted in the physicist having to frequently don shoes that felt like they were kicking his feet in the balls for formal events and the like. Shoes Einstein would wear, albeit begrudgingly, with the laces untied sans socks. However, when it was pointed that this might be a tad dangerous Einstein’s  compromise was to wear socks over his untied shoes. A fashion faux par so many steps beyond socks with sandals it’s viewing the entirety of reality from the edge of existence itself.

Speaking of sandals, Einstein was especially fond of them as this picture of him looking lean and clean is only too happy to prove. 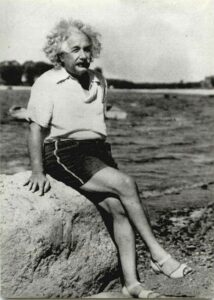 For anyone curious, yes they are women’s shoes and no, the image is not photoshopped, Einstein really gave that few fucks about how people saw him. As for why he’s wearing women’s shoes in that moment, the story is Einstein’s feet really hurt during a walk and he wandered into a nearby store asking for sundials. Which the owner, David Rothman just so happened to have in his backyard and showed to a bewildered Einstein who realised the mistake and repeated his request while pointing at his feet. The misunderstanding understandably embarrassed Einstein who quickly bought the first pair of sandals he was shown, which just so happened to be a pair of open toed women’s shoes. To show their were no hard feelings Einstein signed a few things for Rothman they posed for a photo in which he somehow exuded even more swagger. 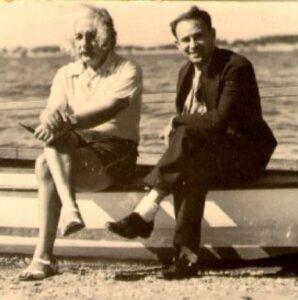