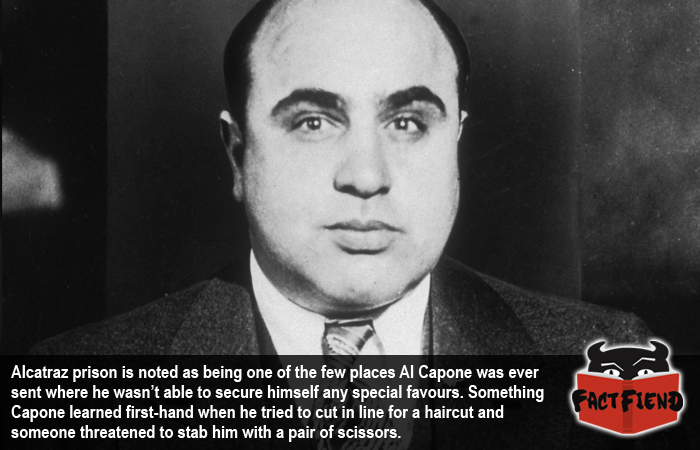 Al Capone is one of the most famous gangsters in American history, a title he earned by being a guy you just straight wouldn’t want to dick with unless you enjoyed razor blade enemas. However, the one place Capone’s reputation couldn’t help him was Alcatraz, where he was stabbed in the back over a haircut.

As the image above mentions, Alcatraz was the one prison where Capone was unable to secure himself any special privileges whatsoever, which is impressive when you realise that Capone had enough money to bribe God. For example, this is the cell Capone called home while he was incarcerated at Eastern State Penitentiary.

That prison cell is nicer than most people’s houses and it’s like 50 years old, and that’s not the only special privilege Capone managed to secure while staying there. According to this source, his cell was so nice that actual prison guards would ask him if they could listen to his own personal radio because it was the only one in the prison.

However, all of that changed when Capone was sent to Alcatraz in 1934 and all of the perks Capone had enjoyed in other, lesser prisons were immediately stopped by warden, James Johnston. Interestingly, Johnston actually met with Capone on his very first day in Alcatraz, Capone, still thinking he was the big dog, tried to joke with Johnston, who with an iron face, gave Capone his ID number before sending him to the same crappy cell as everyone else.

Almost as soon as he arrived in Alcatraz, Capone began trying to game the system by attempting to bribe guards and what not, however, Johnston was having approximately none of that, and he put a stop to it before it even began. Capone himself even noted to Johnston that Alcatraz was the only place that had ever had him “licked”.

Which didn’t mean Capone stopped trying to act like a Big Dick G, quite the contrary, literally a week after arriving in Alcatraz Capone reportedly walked straight to the front of the line of men waiting for haircuts thinking no one would say anything. However, one guy did.

That’s James Lucas, a convicted bank robber who took queuing almost as seriously as he took having dreamy eyes. When Lucas saw Capone trying to cut in front of the two dozen or so men patiently waiting their turn, he strode up to Capone, grabbed him by the throat and told him to cut it out. When Capone responded with the obligatory “do you know who I am?“, Lucas, without missing a beat responded with,

“I know who you are, greaseball. And if you don’t get back to the end of that fucking line, I’m gonna know who you were.”

When Capone tried to regain his composure and perhaps assert his dominance in the prison, Lucas’ response was to stab Capone in the back and face with a broken pair of scissors, an action that wiped 3600 days of good behaviour off of his sentence, James Lucas was hardcore.

And that’s the story of how Al Capone was stabbed over a haircut. 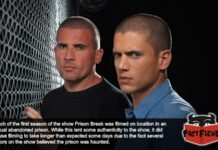