Despite seeming like something you could figure out with a stack of liability waivers, a roomful of volunteers and an afternoon, experts are apparently still unsure which of the hundreds of venomous snakes that call Earth their home is technically “the deadliest”. That said, it’s widely agreed that the most venomous is the inland taipan, a snake that despite it’s fearsome reputation has never actually killed anyone.

First though there are probably people reading this wondering how the most venomous snake on Earth isn’t also considered the deadliest just by virtue of being able to kill a buffalo by farting on it. Well that has a lot to do with the fact that whilst the inland taipan produces venom potent enough that a single drop could kill 100 men, the snake doesn’t give enough of a fuck about humans to bother attacking them. In fact, many experts consider the inland taipan the be an incredibly placid and easy to handle reptile if you can somehow avoid shitting yourself whilst holding it. 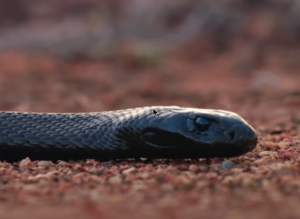 Anyway, despite its chill-ass temperament the sheer killing potential of the snake has made it one of the most feared and respected in its native Australia, with aboriginals fearing it above all other animals that call the bush their home. An impressive feat considering the other shit that lives in Australia.

Now although the snake is notably pretty chill, it is absolutely capable of fucking you all the way up if annoyed, in part, due to its ability to strike multiple times in the blink of an eye. Something that you’d think, when combined with the fact a single drop of its venom can kill a 100 people, would basically make an inland taipan bite a death sentence. As it turns out though, that’s not exactly the case.

You see, according to experts there hasn’t been a single confirmed death from an inland taipan bite, well, ever and everyone who has ever been bitten by one has survived. A remarkable, bordering on unbelievable fact considering how venomous the snake is that also speaks to how accepting Australia is of everything in the country wanting to kill them.