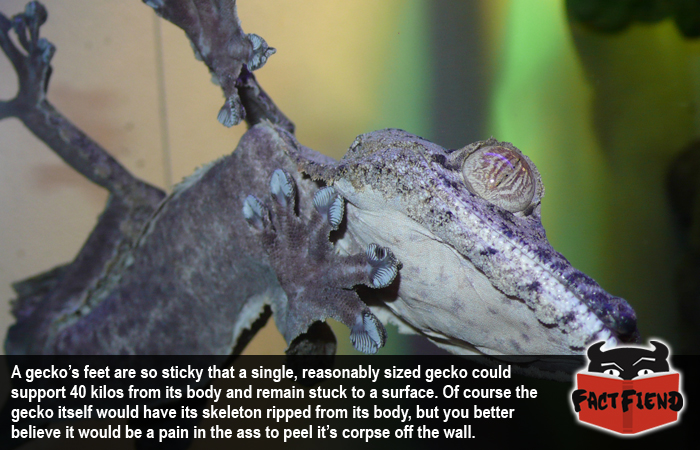 As unbelievable as it may seem, a single, medium sized gecko could literally support half of your body weight from its tiny gecko feet, meaning, yes, if you could somehow glue several geckos to your hands and feet, you could become Spider-man. A really bad version that smelled of gecko piss we’ll admit, but lets see you come up with a better idea.

The soles of a gecko’s feet are covered in millions, upon millions of tiny microscopic hairs, these hairs allow a gecko to stick to a surface utilising van der Waals force. The force is so strong that a single gecko can easily support its entire body from a single toe, though scientists have assured us that only geckos who are “total dicks” do this more often than is required so it’s unlikely you’ll ever see it first hand.

In fact, the soles of a gecko’s feet are so remarkably adhesive that they’re fully capable of supporting the weight of the gecko itself hundreds of times over, even if its skeleton isn’t.

In laboratory settings a single square centimetre of gecko foot has proved more than capable of supporting in excess of a kilogram of weight. After doing a little math under the constant, judging gaze of hundreds of caged geckos hanging by their middle finger, it was surmised that the feet of one gecko could easily support 40 kilograms. Realistically, the feet of just 3 geckos could easily support the weight of all but the most husky of adult humans.

Sadly the rest of a gecko’s body is still playing evolutionary catch up and though a gecko’s feet can support weight many hundreds of times greater than the weight of the gecko itself, its body cannot. Meaning our dream of covering ourself in geckos and leaping at moving trains will forever remain a dream until scientists fully realise the benefit of a gecko tuxedo and stop trying to cure cancer.