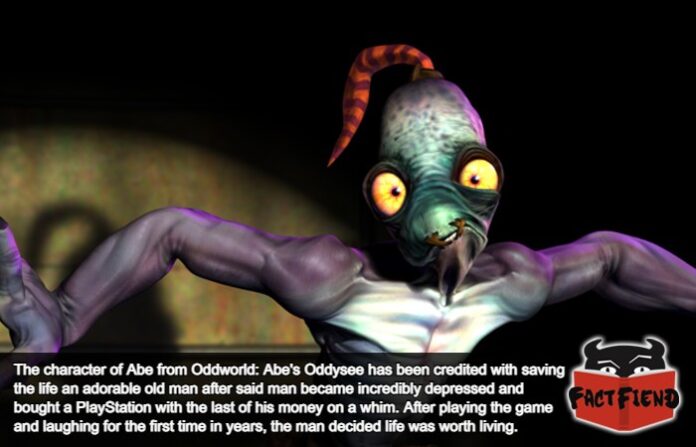 Oddworld: Abe’s Oddysee sometimes known simply as Abe’s Oddysee is a video game where you take control of a bumbling alien trying to save his people, with the emphasis here being on the word try. Widely praised on release for the quality of its gameplay, art direction and writing, the latter of which was so good it literally saved somebody’s life.

How? Well according to Lorne Lanning (the co-creator of the Oddworld series) in 1998 he and the other members of the Oddworld team received a hand-written 6 page long letter from an adorable old man called Alfred Gamble.

In this letter Gamble detailed how his wife of many years had recently passed from a long and debilitating illness which had, somewhat understandably, left him feeling crushingly depressed, listless and pissed off at the world. So much so that his remaining family and friends had stopped talking to him and he began to genuinely contemplate shooting himself in the head with his old service revolver to end it all.

However, for some reason, Gamble literally found himself unable to pull the trigger which baffled him because, as far as he could tell, he had nothing to live for. After some reflection Gamble realised that he still had a few hundred pounds left in his bank account and surmised that the reason he couldn’t shoot himself is because if he did in that exact moment, the tax man would get some of his money.

So, in a move we deeply respect, Gamble decided to spend every penny he had on frivolous, pointless shit so that nobody would get any of his money. Something that led to him buying a PlayStation and a copy of Abe’s Oddysee, reportedly because he took one look at the cover and though “That’s me, that’s how I feel right now.” upon seeing Abe’s face.

Gamble’s plan then was to play the game to see what it was all about and then shoot himself in the head now that he literally had nothing left. However this plan was scuppered when Gamble watched the opening cutscene and started laughing his ass off, something he never thought would happen again. According to Gamble’s letter in that moment he realised that he didn’t want to kill himself and found a new lease on life which saw him reconnecting with his family and generally becoming his old self once again.

As if that story wasn’t adorable enough, Gamble started having Abe tea parties with his grandchildren where he’d play the game and even got an Abe tattoo in his mid-70’s which he would proudly show off to anyone he met alongside his collection of Abe merchandise, some of which he made himself, featuring his favourite character’s from the series. Including, we imagine, Alf, a character the studio named in his honor in acknowledgement of his his story touched their lives.