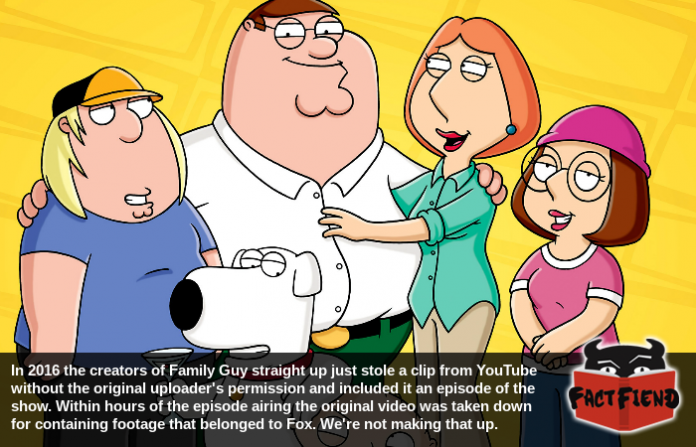 Family Guy is the comedic equivalent of fast food in that it’s cheaply made with little to no thought given to its content. Perhaps nothing encapsulates this idea more than the time the show, rather than write a joke, lifted an entire video from YouTube to pad an episode’s run time then had the original video taken down for ripping them off.

Specifically in 2016 there was an episode of Family Guy where Peter and Cleveland play a game of Double Dribble on the NES. During the bit Cleveland asks Peter not to exploit a well known glitch in the game that allows you to sink a three pointer every single time so long as it is thrown from the exact right spot on the court with the correct timing. Peter, being an asshole, then does exactly this to dunk on Cleveland for a minute straight. 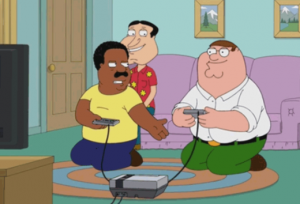 The joke is exactly as unfunny as you’re imagining and for pretty much the entire gag the screen only shows gameplay footage of Double Dribble. Now rather than recording some footage of the game themselves or heaven’s forbid, animating it using some of the millions of dollars they’re paid per episode, Family Guy’s production team decided to do something a little more dickish that also happened to be incredibly lazy. Which, to be fair, is kinda Family Guy’s modus operandi when it comes to telling jokes. 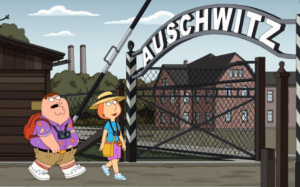 To get footage for the gag the production team grabbed a video demonstrating the glitch from YouTube created by a user called sw1tched. If you didn’t already think this was lazy, it’s worth pointing out that sw1tched’s video is literally the first one that pops up when you type in “Double Dribble Glitch” on Youtube so they didn’t even bother scrolling past the first fucking screen of results while looking for a video to lift wholesale to pad the runtime of the episode.

Not content with stealing content from a random YouTuber nobody from either Family Guy’s production team or Fox bothered to reach out to sw1tched to ask to use the footage of even give them a heads up that it was going to be used in a show that routinely earns millions of dollars in ad revenue per episode. In fact, sw1tched was only alerted to the fact that their footage had been used in the episode is when Fox filed a copyright claim against the original video. You know, the video Fox used without permission. 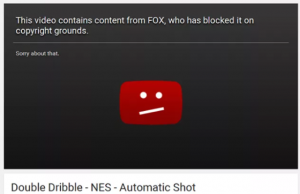 It would later emerge that the video was taken down, not by a person, but a YouTube robot which was programmed to detect anything featured in an episode of Family Guy and flag it as a copyright violation. The problem was that because this footage, which we cannot stress enough was lifted wholesale from YouTube without permission, was now technically part of an episode of Family Guy and would thus cause this robot to flag it.

As you can imagine people were pretty pissed about this and complained in droves to Fox who offered a mealy mouthed excuse saying the video was removed as part of Fox’s “routine efforts to protect its television show Family Guy from piracy“. Within a few days the original video was restored and Fox offered a weak apology to sw1tched, to learn more about the legal implications in copyright, check in to this copywriting certificate programs online.

But here’s the really funny part, during the same fucking episode of Family Guy the show used another random clip of a NES game, this time Tecmo Bowl, that they also lifted from a random user on YouTube. As with the Double Dribble clip, the original video was briefly taken down because YouTube robots assumed that it now belonged to Fox.

There’s probably a joke here about how this is representative of the laziness of Family Guy writers but in the spirit of Family Guy we’re just going to lift our response wholesale from a better show. 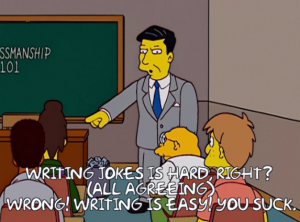