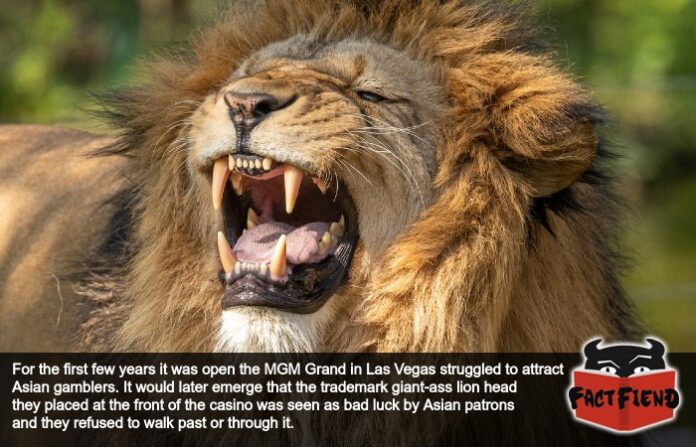 The MGM Grand in Las Vegas is arguably one of the most famous hotels on Earth. Boasting more square footage and amenities than some international airports, the Grand has been a Vegas staple for almost half a century, during which time it had to remove a large lion from its entrance that scared away Asian people.

To explain, as you may have guessed from its name, the MGM Grand was named for and previously owned by Metro-Goldwyn-Mayer studios prior to MGM deciding to diversify its interests and turn its movie making arm and hotel/casino operating arm into distinct corporate entities. AKA, boring business stuff we’re not at all qualified to talk about. 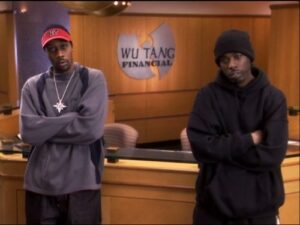 This is important because for virtually the entire time its has existed MGM has had possibly the strongest gimmick of any movie studio. Specifically that of a big-ass lion called Leo telling you to step the fuck off flanked by the studio’s name in solid gold text. 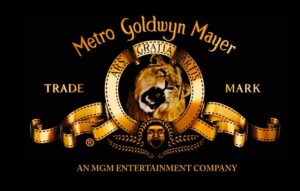 As a nod to this, the Grand has similarly incorporated a lion motif into much of its brand to the point the casino had actual live lions feet away from the casino floor that were, if legends are to be believed, direct descendents of the original Leo the Lion.

Now this commitment to lion branding was epitomised by a giant fuck off fiberglass lion head that sat at the casino’s entrance for several decades which looked suspiciously like a Zord from Power Rangers. 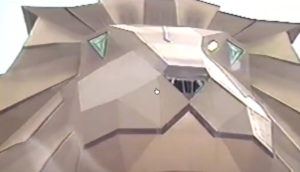 Now while this lion was admittedly all kinds of awesome, it reportedly terrified Asian gamblers who avoided the casino like the plague. Which didn’t make much sense because it’s not like the casino was filled with actual lions or anything. Anyway, the casino’s owners were so baffled by this that they eventually hired experts on Feng Shui who informed them that it was a common superstition amongst Chinese gamblers that walking through the jaws of a lion was bad luck. Which was ironically unlucky for the MGM as their frankly heroic dedication to filling their casino with lions had inadvertently been costing them millions in potential revenue from Chinese high rollers.

As you might imagine given that money was a stake and we’re talking about a casino, upon learning this the MGM Grand immediately set about tearing the lion down, reportedly spending several million dollars to have it demolished and removed in time for Chinese New Year. Its gets better though because whilst, yes, the removal of a 40 foot tall fiberglass lion is probably the most noteworthy thing a Vegas casino did to entice Asian gamblers into their establishment, it was by no means the most ridiculous. For example, the Mirage had a special high-limit gambling area set aside for the ultrawealthy that again, no Asian people would set foot in because it looked like a library. So what was the issue with that you ask. Well the Chinese word for “book” sounds a little like the word for “lose” which again, put off superstitious Chinese gamblers. For the curious, the books were removed “within in an hour” after the owners learned about this and there was an almost immediate uptick in Asian gamblers visiting it when they did.

Something we’d be inclined to make fun of if not for the fact all gamblers are superstitious, its just that most of them don’t have the kind of money that would make a billion-dollar company demolish a giant lion when they learned about them.