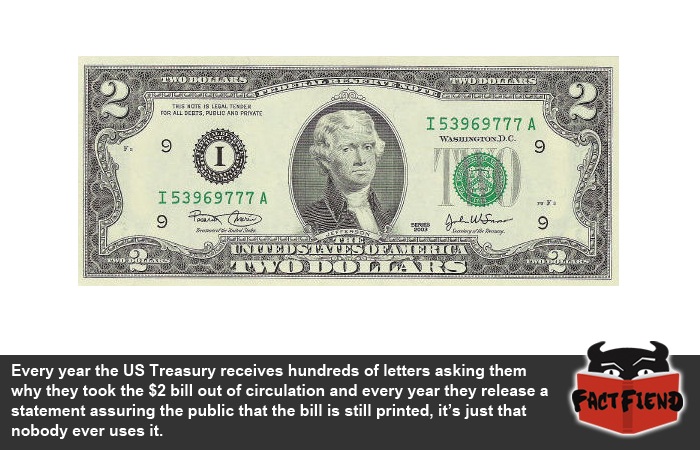 The US $2 bill is so rarely seen or encountered during day-to-day life in America that a fairly sizeable percentage of the population don’t even know that it exists. However, despite nobody being aware of it and no real need for it to exist, the Treasury won’t stop printing them.

According to the US Treasury, the seldom seen $2 bill is amongst the rarest and least utilised piece of American currency, trailing only behind dollar coins and IOU’s written using crayon. Despite being used less than dick scented roll on deodorant, over a billion dollars worth of $2 bills are supposedly in circulation right now.

Part of the reason the bills are so rarely seen is because banks virtually never request them and as a result, they never end up in the hands of citizens. Which isn’t to say you can’t get them from a bank if you ask nicely and/or are carrying an assault rifle, most people just prefer to deal with the more common bill denominations.

So you’re probably wondering, why the hell haven’t they stopped printing these things? Which is a good if not slightly aggressively worded question. While the Treasury has toyed with the idea of discontinuing the $2 bill because fucking nobody uses it they haven’t because every year hundreds of people write them angry letters asking where they all went.

This may seem a little paradoxical, so allow us to explain. While the $2 bill isn’t generally utilised by the majority of the populace there is a small but dedicated subset of people who enjoy using them. One of the more popular uses for the note is to use them as a way of demonstrating the positive financial impact a given thing can have on an area, like in 2013 when proponents of legalising marijuana encouraged everyone to use $2 bills when making a purchase. This idea is that the influx of money the thing being touted brings in will be immediately evident when everyone in town suddenly starts asking when the fuck Thomas Jefferson moved from the nickel onto paper money.

While that’s certainly an interesting and novel use of money as a simple way of demonstrating economic impact, “seeing how much money stoners spend on getting high” isn’t exactly a compelling reason to keep the bill in circulation.

Luckily there’s another group of people who also relish using the $2 bill in their day-to-day life. Assholes. You see, despite the bill being so underutilised many people aren’t even aware that it exists, there are some who go out of their way to acquire as many as possible and spend them wherever they can. While people who do this claim that it’s just to help put the bill into circulation and become more accepted as as everyday tender, you just know that they fucking love correcting the cashier when they try to point the bill is fake. Standing there smugly as the minimum wage employee they so expertly fooled has to call over a manager to confirm that the note is real, feigning frustration at the cashier’s ignorance as they stare impatiently at their watch. Tutting at the employees of the discount mega-chain they patronised for not being aware of the existence of a bill so uncommon banks don’t stock it as the faintest hint of an erection becomes visible across the front of their pants.

Thanks to assholes like this, and other people who use it we guess, the Treasury continues to print the bill in infrequent quantities to keep up with the non-existent demand, knowing that even though they printed a billion dollars worth of them, some asshole is stil going to write a dickish, self-congratulatory letter asking why they never get a $2 bill with their change.

For more monetary buffoonery, why not read about the time the Mint tried to make a new, better penny, but had to destroy them all due to pressure from the people who make vending machines.