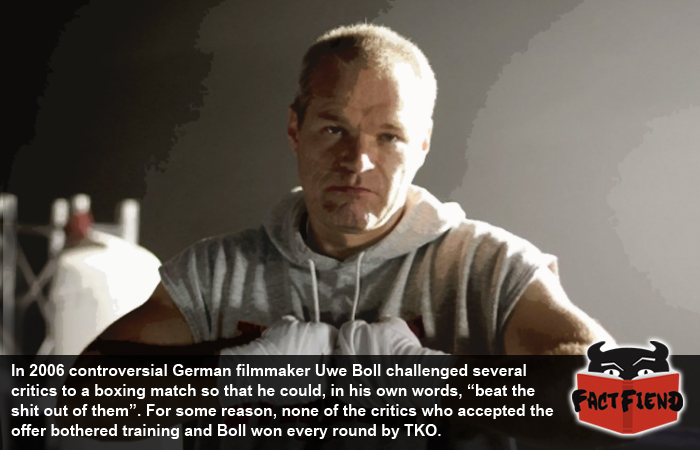 Uwe Boll is a controversial figure online who has, over the years, had so many people online tell him that they wanted to kick his ass that in 2006 he decided to challenged his more vocal (read: dickhead) critics to a boxing match, in which he proceeded to beat the everloving shit out of them.

If you’re not familiar with Boll’s work, or why he’s such a polarizing figure online, one of the major beefs people seem to have with him is that he utilises a loophole in German tax law to essentially make money no matter how badly his movies perform at the box office, giving him little to no reason to actually try and make his movies contain anything resembling artistic depth or subtlety. Since a picture is supposed to say a 1000 words, rather than giving you an example of the kind of crap you’ll see in an Uwe Boll movie, heres a screenshot from one of his latest films, for which we’re going to provide no context whatsoever. 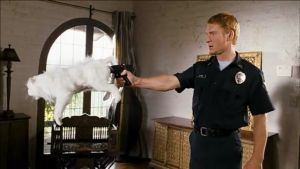 Another problem people have with Boll is that many of his movies are adapted from video game franchises which he seems to not care about representing in a way that appeals to fans, either because he doesn’t properly understand the nuances of the source material or more likely, because he doesn’t give one iota of a shit what fans think. While Boll’s tax avoidance scheme is, to borrow a phrase from finance lawyers, shady as fuck, it’s the video game thing that gets Boll the most flack online because of course it is.

In 2006, Boll grew tired of the endless abuse he was getting from critics, especially the ones personally insulted him and issued an open challenge to anyone who’d published at least 2 negative reviews of his work somewhere online or in print to step to him in a boxing match. In particular Boll wanted to challenge reviewers who’d talked big about how they’d kick the shit out of him if they ever met him in real life or just been, in his eyes, unfairly critical of his work.

As Boll is unable to do anything without pissing at least one person off, either accidentally or intentionally, his eventual choice of opponents was criticised with some feeling that he’d handpicked opponents he knew he could beat (because real boxers never do that) while avoiding challenges from people who’d stand a real chance against him in the ring, like internet legend, Seanbaby who was one of the people who threw his hat into the ring when he heard he’d have a chance to punch Uwe Boll in the dome but never heard back from the filmmaker. It should be noted however Boll gave everyone who accepted his challenge that he did agree to fight 3 months to train for the fight, that he offered to fight them all on the same day and that they were all at least 10 years younger than he was, so it’s not like the odds were stacked in his favor, even if he did avoid fighting people who would have whupped with endless twirling backfists.

In the end, Boll arranged to fight with 4 critics on the same night in Vancouver, while a 5th agreed to fight him in Spain a few days earlier. For some reason, despite Boll saying in several interviews before the fight that he fully intended to beat the living shit out of his opponents and was quoted as saying that he hoped after the fight they’d suffer brain damage to the point they couldn’t write anymore, none of them took his challenge seriously, even when GoldenPalace.com sponsored the whole thing and sent them sponsored boxing gear to wear. Instead believing the whole thing to be a PR stunt and mistakenly writing off his threats as jokes, even though he delivered them in a German accent while scowling, which is statistically the most serious you can appear while saying something. As a result, none of them spent the 3 months prior to the match training, while Boll who was an amateur boxer in his youth spent the time getting ripped.

The best part is, the critics scheduled to fight Boll only realised this a few days prior to the event when they were invited to watch Boll train and walked in on him in the middle of delivering a punishing 30 hit combo to his sparring partner’s ribs. Which is when it was revealed that along with having no training and with the exception of one critic, no formal background in boxing whatsoever, half his critics hadn’t even seen one of his movies, instead basing the fact they disliked them based entirely on the fact they’d heard other people say they sucked. With one critic saying that they felt like they didn’t feel like they needed to have watched one of his movies all the way through to properly critique it, which along with being an amazing thing to hear coming from someone’s mouth while the words “Movie critic” are literally superimposed inches below their face, sort of justified Boll in being angry at these guys, making it actually kind of satisfying to see footage of them smugly deriding his movies juxtaposed with footage of them being punched in the face.

Boll, unsurprisingly won all of his matches that night, all of them by technical knock out in the first round, by technical knock out we of course mean, “eye socket crushing haymaker to the face, stomach or kidney”, before calmly leaving the ring. When later asked if he felt that he had taught his critics a lesson, Boll calmly responded “absolutely”, we feel that it’s important to note that Boll said this while one of his opponents was literally lying several feet throwing up in the gutter because they were still recovering from Boll’s “lesson”.

Luckily for fans of schadenfreude, all of the shit talking from the critics and their eventual pummelling at Boll’s hands was filmed and turned into a film, aptly titled, Raging Boll so that we can forever appreciate that there’s at least confirmed example out there of someone actually following through on the promise to beat someone up for talking smack about them online.