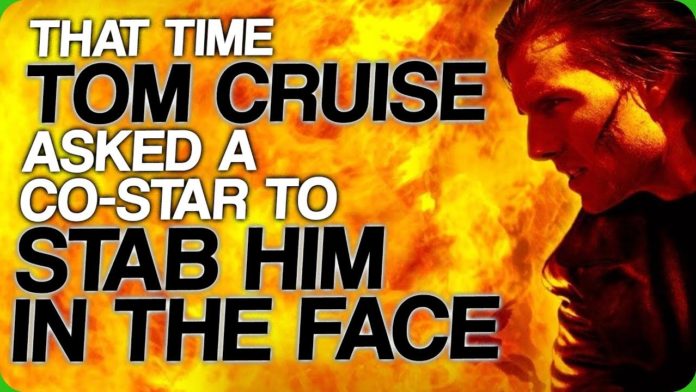 Tom Cruise doesn’t exactly have a reputation as the sanest man in Hollywood, even discounting all of that Scientology shit he’s into, Cruise is still considered to be pretty unhinged by even Hollywood’s lax standards because of the utter disregard he seems to show for his own body when it comes to making movies. Like that time he asked a stuntman to try and stab him right in the fucking eye.

Now it’s pretty well known that Tom Cruise usually insists on doing all his own stunts in most every film he stars in, which is fine, a lot of actors do that. What is less well known though is that Cruise will often suggest doing more dangerous versions of stunts required of him when he’s on set to make them look more realistic and possibly because he’s batshit insane. 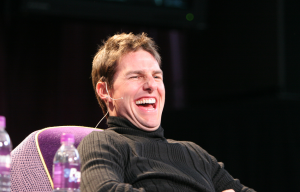 For example, when Cruise was filming Mission: Impossible II, the original script called for Ethan Hunt to have a sick knife fight with some random henchman on a beach. However, Cruise felt that the scene could be a little more, dramatic, and thought it would be cool if during the fight, his character almost had the knife shoved right into his fucking eyeball. Which, if we’re being honest, did actually make that fight scene about 80% cooler and ended up being one of the most iconic moments of the entire franchise.

Because this movie was being directed by John Woo, Cruise’s suggestion was immediately written into the fight choreography while Cruise and the director tried to work out the best way to film it. Cruise, not wanting to waste time dicking around with CGI, suggested to the director that it would probably be much easier and way funnier for everyone if they just stuck a knife to a steel cable and then filmed a stuntman trying to stab him with it like that scene in The Simpsons where Homer tries to stab someone with a cheque-writing pen. 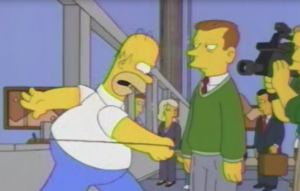 To make sure the knife didn’t, you know, kill him, Cruise measured exactly how far the knife could reach and then positioned his actual, real human eye less than half an inch away from it before asking the stuntman to try and stab him in the face “as hard as he could” so that they captured the most realistic reaction possible.

If you watch the scene back you’ll see that the knife itself is actually shaking as it’s being held near Cruise’s eye, that’s not for dramatic effect, the stuntman was genuinely trying to stab Cruise in the face as hard as he could and was only being stopped by a hidden cable just out of shot. According to Cruise, the stuntman was really nervous because he insisted on performing the stunt with a real knife. Why a real knife? Well why not a real knife?

In Mission: Impossible 3, upped the ante yet again by insisting that for the trailer bait scene in which he’s slammed into the side of a car by the explosion caused by a missile, they let him run as fast as possible before activating the mechanism that slammed him into the car for maximum effect. Then demanded they let him do the scene 7 times to make sure he got it right. Just to reiterate, Tom Cruise, a 44 year-old man at the time this film was being made, asked to do this:

If we didn’t know any better, we’d say Tom Cruise kind of enjoys being hurt, but we think it’s far more likely that the actor simply doesn’t give a shit because he’s Tom Cruise and Tom Cruise can’t die or be hurt because he has no true corporeal form that can succumb to Earthly damage or harm.

If you still have a hankering for more Tom Cruise goodness, we have an article about one of the longest threads in Reddit history you may want to check out.