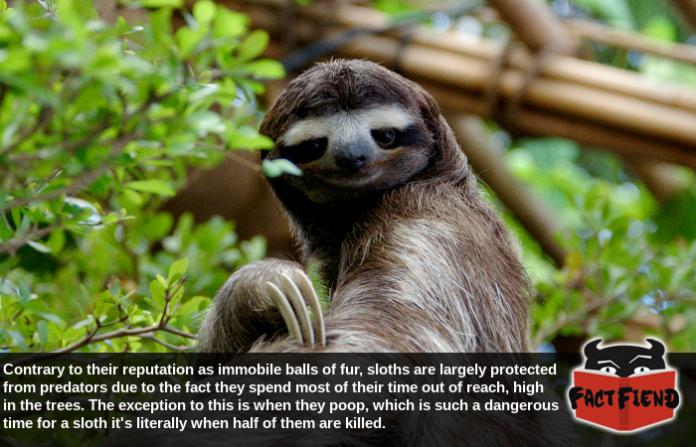 You’d think, given that they have a top speed comparable to that of a fart in a crowded elevator, sloths would be a prime target for jungle predators. Oddly though, sloths are surprisingly safe from predation, unless that is, they go for a shit.

You see, contrary to what their name suggests, sloths are capable of moving with astonishing bursts of speed if they absolutely have to, well, astonishing by sloth standards. In addition, sloths are armed with large, razor sharp claws they can use as a last ditch effort to fend off a predator if they’re ever cornered, which combined with their surprisingly long limbs gives them an impressive amount of reach. 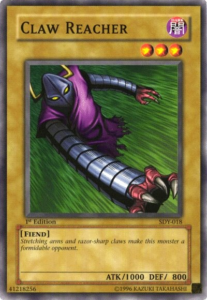 Not that sloths ever need to defend themselves because they’re pretty much invisible when they’re at rest thanks to their natural camouflage and since sloths are immobile approximately 90% of the time (that’s not hyperbole by the way). It means that spotting one of these things in the jungle is like trying to find the Predator while wearing 3 pairs of sunglasses. 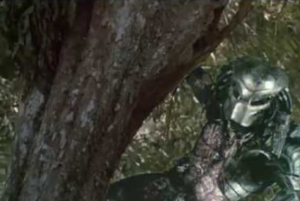 On top of all this, sloths are surprisingly hardy to the point they can fall from the tops of trees and walk it off like they don’t even give a shit and have the ability to consciously slow down their already glacial metabolism so they don’t need as much oxygen. Something that allows them to hold their breath for over half an hour if they really want to because oh yeah, sloths can swim. 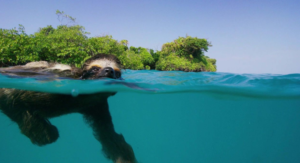 The thing is, this ultra-slow metabolism means that sloths generally only need to shit once a week and as a result they spend the majority of their life constipated. Likened by sloth experts to “giving birth” due to the immensity of the turds they have, sloths can lose a quantifiable percentage of their body weight in a single bowel movement.

As if this wasn’t bad enough, sloths need to head to ground when they want to pinch a loaf and the enormity of the shits they take mean they have to spend quite a bit of time doing the deed. Like many animals, sloths are completely immobile while taking a dump and thus, a prime target for predators.

Shitting sloths are considered to be such easy pickings for predators that an almost comically sad percentage of them die when they’re pooping with it being noted that half of all sloth deaths occur when they leave their favourite tree. A statistic made all the worse when you also consider that pretty much the only time sloths ever leave the relative safety of a leaf-covered branch is to take a shit. Meaning the majority of sloths die when they’re forcing an unimaginably large turd out of their butt because we forgot to mention, sloths poop all at once. Because that’s not a very nice image, we should also probably point out that before they void their bowels, sloths do a special “poo dance”.

An image we’d like to leave you with because it’s a way funnier one than a jaguar doing sick-jaguar combos on an unsuspecting sloth mid-way through a dump.