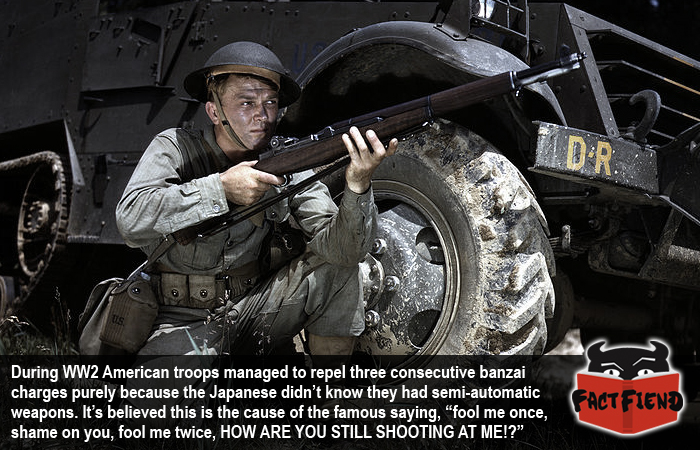 During WW2 the weapon of choice for most US soldiers was the M1 Garand, a sturdy semi-automatic rifle capable of pumping 8 bullets into a person’s torso in half as many seconds.  For some reason though, the Japanese didn’t know that American troops had such a weapon and boy did American troops take advantage of that.

For those of you reading who didn’t spend as much time as we clearly did playing Call of Duty: World at War, a semi-automatic weapon can basically fire as fast as you’re capable of pulling the trigger, however, the Japanese initially only believed that American troops were equipped with bolt action Springfield rifles, which needed to be reloaded after every shot fired.

This led to a weird and rather surreal situation in which American soldiers found themselves being unexplainably bum-rushed by Japanese soldiers after only firing a single shot, despite the fact they almost always had another 7 just itching to be launched into a set of Japanese lungs. Japanese intelligence was also suitably confused by the fact American troops seemed to have some sort of weird reload cheat activated for the majority of their engagements.

When American troops realised that the Japanese were operating with bad info – that they were equipped with guns that could only fire a single shot before needing to be reloaded – they actively began to take advantage of it in hilariously cruel ways.  For example, some soldiers took to firing a single shot into the air when they knew Japanese soldiers were around as a way of finding their hiding spot because they knew that as soon as a Japanese soldier heard an unfamiliar gunshot, they’d assume it was an American bolt action rifle and that its wielder was currently vulnerable and stick their head up to look for where it came from. After doing this, the Garand user was free to simply pop the Japanese soldier in the dome with a sick 360 no-scope.

Perhaps the most glaring example of this mistake playing into American hands was the time an American platoon managed to troll a Japanese squadron to storm their position three fucking times by all firing a single shot into the air, waiting for the charge and then firing another volley into the screaming Japanese mass charging towards them with knives. The best part about this is, technically the Americans had enough bullets to do this again, but the Japanese force attacking them ran out of men first.