This article has now ascended to the next level and become a video, which you can find below. The original, less powerful article can be found after the jump if you’d prefer to read all about how McDonald’s hiring process for Ronald McDonald in the 80’s was inept to an almost hilarious degree.

According to varying figures, at his peak Ronald McDonald enjoyed a greater degree of recognisability than the President of the United States, Santa and Cobra Commander combined. Likewise, the actors who played him were given a whole slew of perks by the company and all they had to do in return was tell the kind of lies that make a person question what they’re really doing with their life.

Back in the heyday of McDonald’s when Ronald McDonald’s fame was at its apex, the company pretty much gave the actors who donned the fuzzy red wig whatever the hell they wanted as long as they were able to follow the rules of being Ronald to the letter without any deviation. As you’d expect, McDonald’s had the actors who played Ronald sign numerous waivers promising to never reveal what they learned while working for the company. However, this wasn’t always the case, as Geoffrey Giuliano is only too happy to explain after his brief tenure with the company.

As noted above, back in the 70’s Giuliano played Ronald McDonald for a brief but significant period of time during which he became so disgusted and disenfranchised with what he saw working for McDonald’s that one day he walked into his boss’ office and told him to shove his job just all the way up his ass.

Just to be clear, working as Ronald was a real cushy gig so Giuliano didn’t quit because it didn’t pay well or something, by Giuliano’s own admission he had his own office, access to a personal chef 24 hours a day and a company credit card with no limit. In return all he had to do was perform a few magic tricks while dressed as Ronald McDonald. If you’re wondering why Ronald McDonald needed his own office, Giuliano was curious about that too, because he claims that in the year and a half he worked for McDonald’s, he never once did any work in it and his personal secretary pretty much spent all her time sitting on her ass doing nothing. This was on top of a huge salary that came with a plethora of additional perks, benefits and discounts. In other words, Giuliano was being paid a small fortune to sit in a nice office eating expensive food and occasionally dressing like a dumbass.

And he gave it all up because he simply couldn’t live with himself knowing that he was encouraging children to eat McDonald’s food, which is impressive when you realise that Giuliano was under strict instruction to never overtly encourage children to eat it. Instead, Giuliano was asked to make the children associate him, and hence the McDonald’s brand with “fun” which would make them kick and scream until their parents took them to eat there, which as you may notice is manipulative as fuck and Giuliano knew it.

According to him, many of the children he spoke to as Ronald were completely unaware that McDonald’s food was made from animals which wasn’t helped by the fact he was told directly by McDonald’s to say that McDonald’s burgers and fries were grown in a patch if any curious child ever asked how they were made. In essence, he was barred from explaining to children that burgers were made from cows because McDonald’s knew that cows are cute as shit and children generally don’t like eating things they want to take home and feed cookies to.

Weirdly Giuliano himself would eventually stop eating at McDonalds after being given an exclusive tour of one of their factories, an experience that was so jarring that it turned Giuliano into a lifelong vegetarian. Just let that soak in, the literal face of McDonald’s was so sickened by what he saw in a McDonald’s factory that he never ate meat ever again and has spent almost his entire adult life actively campaigning against McDonald’s.

Because oh yeah, after quitting as Ronald McDonald in the most awesome way possible, Giuliano has dedicated his time to campaigning for animals rights and has gone on record as saying he’s available “7 days a week, 24 hours a day, 365 days a year, to do anything that anybody wants me to do to fight this big Goliath” that’s how much this dude hates McDonald’s and they were paying him thousands of dollars a week to make balloon animals. People don’t walk away from a gig that sweet unless they have a serious axe to grind.

Because Giuliano left before McDonald’s started requiring its Ronalds to sign a non-disclosure agreement (something they brought in immediately after he started shit-talking the them to anyone who’d listen), he’s got a lot of dirt on the company. One of the more telling things he’s revealed in the years since he left McDonald’s is that while he was there, he never once saw anyone working at the McDonald’s head office eat something McDonald’s sell and he was told that while he was in costume as Ronald, he wasn’t allowed to eat their food in case it smudged his make-up. If that doesn’t already paint a picture of the low opinion McDonald’s have of their own food, one of Giuliano’s more fond memories is the time he curiously asked a marketing executive if he though the food was good enough and in response he said:

“You don’t get it, don’t you understand how it really works? We put shit out there and people buy it if you put enough money in the advertising.”

But by far our favourite thing is that before he played Ronald McDonald, Giuliano’s first acting gig was dressing up as the fucking Burger King. 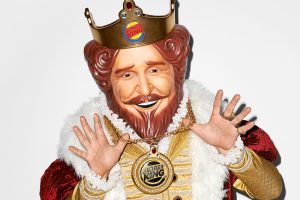 Meaning for about a year, the guy acting as the public face of McDonald’s was a vegetarian who didn’t eat their food who originally worked for Burger King.