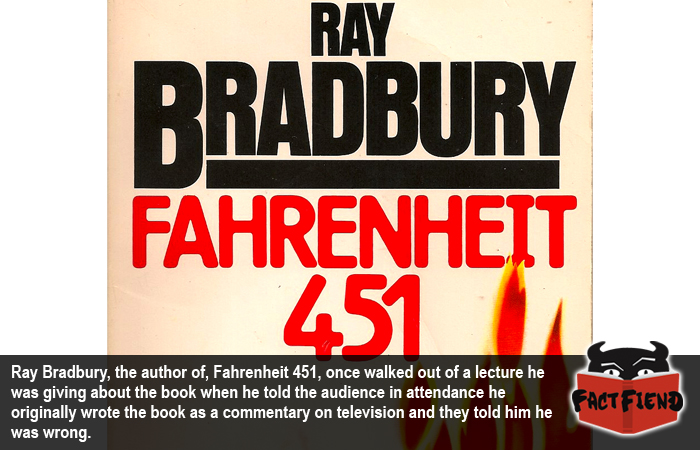 Ray Bradbury is a name synonymous with one book, Fahrenheit 451, a novel set in a twisted future version of America where books are burned on sight. The book is well-regarded as a literary classic and it has been studied by academics for decades, some of whom once told Bradbury, to his face, that he was wrong about his own book.

Before we get ahead of ourselves though, it has long been believed by people studying the novel that it is a commentary on censorship and a very clever one at that. There have been literally thousands of articles written about this subject and we’re not going to bore you with the details about how academics have interpreted the novel over the years, because they all say the same basic thing. Fahrenheit 451 is a novel about censorship.

The thing is, according to Bradbury, you know, the guy who wrote the book in the first place, it isn’t about censorship, like at all. Though Bradbury did indeed write the book during an era when actual book burnings were a thing that totally could have happened at any moment, he has always insisted that the main theme of the book is the role of the mass media and its effect on the populace, in particular television and how it makes people less able to digest more complex forms of media, like books.

However, virtually nobody accepts this as the true theme of the novel, even though it’s an exact-ish quote from the guy who wrote the bloody thing. The perfect example of this was a time when Bradbury himself was giving a lecture on the novel to a class of college students and upon casually mentioning that the theme of the novel was the dangers of television, he was stopped in his tracks by someone loudly exclaiming “no, it’s about censorship!“.

After regaining his composure, Bradbury then tried to correct the student, presumably by pointing to the part of the cover where it said his name in giant letters, only for the rest of the class to chime in and agree that the novel was totally about censorship.  Bradbury was so pissed off at the sheer pig-headedness of the students that he straight up stormed out of the class and vowed he’d never give another lecture on it.

So the next time someone tells you that college students are full of themselves and you think they’re being a little unfair, just remember that a group of them once literally tried to argue with a guy who wrote the book they were studying and made him leave out of frustration when they wouldn’t believe his interpretation of his own book.