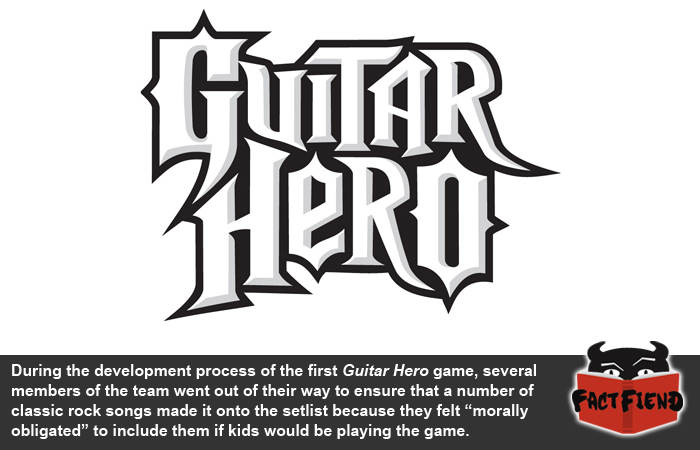 Considering how dinky plastic guitars with one button missing are now one of the most common pieces of electrical fauna you encounter in second hand shops, we think it’s pretty safe to say that a lot of people reading this have played at least one Guitar Hero game. Although the developers didn’t originally plan on the game becoming the smash hit it did, they sure as hell made sure that the set-list rocked exactly the right amount.

If you’re wondering what we mean by that, if you take a look at the game’s official tracklist you may notice that hidden amongst the smattering of thunderous riff driven metal songs are a couple of tracks that don’t seem to belong. For example, while nobody is going to sniff at Bark at the Moon or Ace of Spades being featured in a game called “Guitar Hero”, the inclusion of songs like I Wanna Be Sedated seems, odd.

Before anyone jumps to comment and call us a bunch of dickfaces, we just mean that while I Wanna be Sedated is undeniably an awesome song by a great band, its main and pretty much only riff is nowhere near as iconic or imitable as say the opening few bars of Iron Man or Smoke on the Water.

As it turns out, the inclusion of songs like this were an intentional inclusion on behalf of the developers who felt “morally obligated” to fill the game with a bunch of dicksmashingly awesome guitar-based songs, even if they didn’t exactly fit with the theme of the game.

You see, the developers figured that if the game was going to be played by children, they were in a prime position to expose them to songs they may not necessarily hear on their own. As such they decided to litter the game’s soundtrack with a number of songs they felt kids should listen to even if they didn’t necessarily fit with the theme of the game. This is why to get to all the songs with the cool guitar solos (AKA, the only reason to play the game), you first had to play and listen to songs by David Bowie and the Red Hot Chilli Peppers.