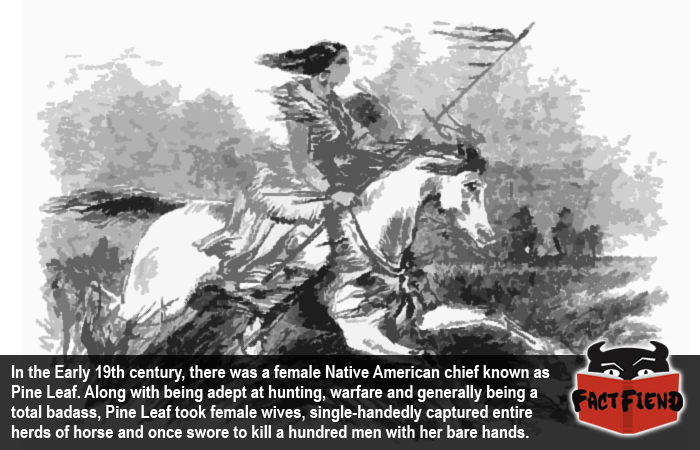 Born in 1806 to the White Clay Tribe, at the tender age of 10, Pine Leaf was kidnapped by a member of the Sparrowhawk people. Ever the quick thinker, Pine Leaf avoided being gutted on the spot by telling her captors that she was actually a member of their tribe that had been kidnapped by the other guys a few years earlier, a lie they believed thanks to the fact Pine Leaf was able to speak a little of their language and they’d failed to notice the huge gouge marks left in the ground left by her sizeable woman-balls. Another, equally as awesome version of the story is that the Sparrowhawk man who kidnapped Pine Leaf did so in order to replace his son, who’d recently been killed and that he wanted to raise Pine Leaf to be a fearsome warrior.

Lack of adequate record keeping means we’ll likely never know which one of these versions of events is correct, however, what we do know is that upon joining the Sparrowhawk people, Pine Leaf very quickly became a warrior of great renown. For example, in literally the first battle she ever took part in, Pine Leaf killed 2 enemy warriors and then captured an entire herd of horses that were running around in a field nearby, just because.

In keeping with the war-like way of life her tribe enjoyed, Pine Leaf vowed that she’d never take a husband until she’d personally killed 100 men with her bare hands. A promise she presumably kept because Pine Leaf did eventually take a husband, who left 5 weeks after marrying her because he was a shithead.

The man in that picture is, James Beckwourth, a famed mountain man who lived amongst the Sparrowhawk people and eventually managed to convince Pine Leaf into giving up her life as a warrior badass, only to immediately decide he no longer wanted to be a married man weeks after sealing the deal and taking her virginity.

Along with marrying Beckwourth, Pine Leaf also reportedly took several female wives during her lifetime. Considering how poorly men treated her, we’re honestly not surprised to learn that and we hope she had tons of hot lesbian sex just to spite her asshole former husband.

As noted above, as her fame grew, Pine Leaf eventually earned the title of Bíawacheeitchish (literally: Woman Chief) from her peers. Pine Leaf reportedly held the position of War Chief in her tribe for 20 straight years after counting coup several times in battle to prove her mettle.

For those of you who aren’t familiar with the term, counting coup basically entailed risking your life in battle just to annoy your enemy and show that you didn’t fear death, usually by running up to them and pushing them over while unarmed or stealing horses or some shit.

After living a life filled with war, battle and tons of lesbian sex, Pine Leaf was ironically killed while on a peace mission by an enemy she didn’t expect to be armed. Because her life was a never-ending shower of assholes apparently.