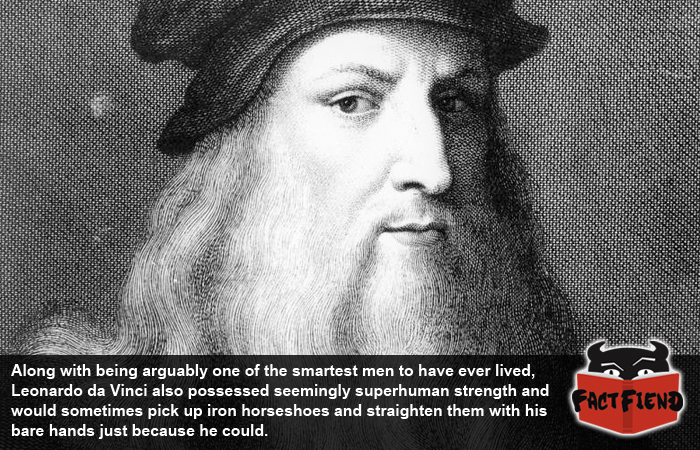 Leonardo da Vinci is best known for his almost countless contributions to science and the arts and for being the inspiration behind the names of one quarter of the Ninja Turtles. As it turns out, old Leonardo likely had more in common with the half-shell heroes than most would assume given that he could apparently kick the ass of most of the people reading this.

According to most every historical account of da Vinci ever written, the Renaissance painter was stunningly handsome and possessed a lean, muscular figure well into his old age. On top of this, Leonardo was also said to be taller than the average man of the era (standing at about 5ft 9 inches tall in his prime) and had a fondness for garish, brightly coloured clothes that were usually only sported by younger men. As if being several inches taller than most of his peers and always wearing lime green tunics didn’t make Leonardo stand out enough, in a time when men mostly favoured short, conservative hairstyles and beards, Leonardo rocked the shit out of a veritable power metal mane and wizard beard combo.

Leonardo was also a man of the people and many tales exist of his generosity and kindness to the poor and needy and he could often be found walking around the markets of Florence buying caged birds for no other reason than to let them go or dining with those less fortunate than himself.

Though Leonardo rarely crossed words with others, it’s noted that he was able to quell most disputes he happened upon through nothing more than the sheer force of his personality and reputation and his mere presence was often enough to calm a room. While many attribute this to the amount of respect Leonardo commanded throughout Renaissance-era Italy and beyond, it’s also possible that people were afraid of pissing Leonardo off because of his reputation as a stone-cold badass when he was a young man.

Along with, as mentioned above, being able to effortlessly bend iron horseshoes, in his youth Leonardo could grasp iron door knockers in his large, man-sized hands and crush them with little to no apparent exertion on his part and was known to be earn extra money by challenging local tough guys to see who could throw a large rock the furthest.

Even as an older man, Leonardo retained much of the strength he had in his prime and would amuse himself by challenging visitors to attempt to lift large weights scattered around his workshop or by handing them a piece of iron and asking them to try and bend it. When the visitor invariably failed to do the latter, Leonardo would take the iron bar and mould it like soft clay into a decorative shape or simply tie it into a knot. When they failed to do the former, Leonardo would lift the weight with one hand and lightly place it onto a table.

Why they never bothered to include either of these things into one of the Assassin’s Creed games is a mystery, because that would have made them so much better.

If learning that an old man could probably kick your ass hasn’t disheartened you too much, why not read about how the strongest man in the entire world is probably in prison right now.