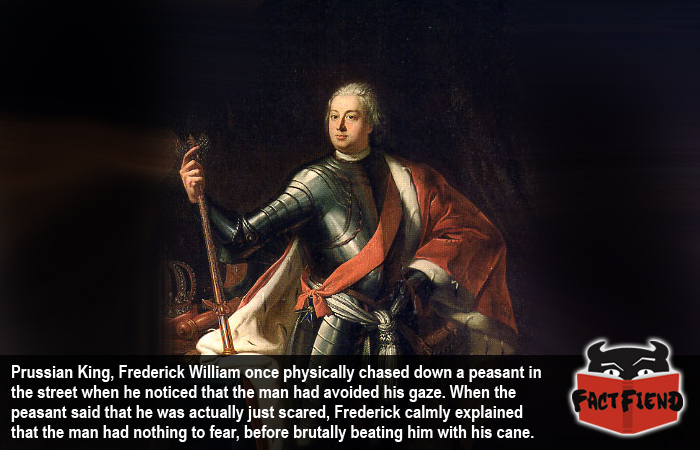 Motivating people to work is a difficult thing because people will naturally shy away from doing things that are hard (teehee) unless of course you take a leaf out of King Frederick Wilhelm of Prussia’s book and decide to just beat the shit out of them with a cane.

During his reign as King of all Prussia, Frederick was infamous amongst his people for his frugality and temper. Unfortunately for everyone within about 6 feet of Frederick, this frugality manifested itself as a deep loathing of laziness.

Frederick despised laziness so much that it wasn’t uncommon for him to be seen strolling the streets of Prussia giving lectures to young men he saw idly wasting their time with useless pursuits like drinking or having fun, seemingly unaware that if he had the time to do this, he too was probably guilty of being a bit of a lazy turd. When the lectures didn’t work, Frederick would resort to beating the hell out of people he felt weren’t working hard enough with his trusty cane.

But it wasn’t just lazy people Frederick would beat up, as mentioned above, Frederick once assumed his natural cheetah form to run down a some random peasant who rightfully ran away in fear when the two locked gazes. After learning that the peasant was afraid of him, Frederick consoled the terrified young man by beating him half to death while screaming “you should love me“.

When it came to motivating his soldiers, Frederick was even more strict. You see, the only thing Frederick loved more than saving money, was soldiers. The king would famously have men march through his bedroom when he was sad and had his own son awoken every morning by the sound of cannon fire and once even gave him a regiment of child soldiers to command for his 6th birthday.

When the King once saw a soldier in his army make a mistake during a marching exercise, he personally walked out into the ranks of soldiers and you guessed it, beat him with his cane. Because there was apparently no problem in Frederick’s life that couldn’t be solved with a liberal application of wood or furious head slaps.

For all of his faults though, King Frederick’s undeniably assholish behaviour got results. When Frederick died he notably left behind an enormous surplus of funds and one of the single finest standing armies in all of Europe, which his son then used to turn Prussia into an economic powerhouse.

In fact, Frederick’s penny-pinching saved so much money that by the end of his reign, Prussia’s annual income from taxation had almost doubled and the country’s coffers were so full, he had to resort to keeping all of the country’s money in his basement. This was no doubt thanks in part to Frederick’s very controversial “tax the shit out of rich people” policy and his habit of selling off his royal paraphernalia including his boat and all of his court musicians.

We’re not saying that Frederick wasn’t an asshole, because he totally was, all we’re saying is, he ended up with so much spare money he literally had to resort to piling it up in his basement. Anyway you look at it, that’s kind of impressive