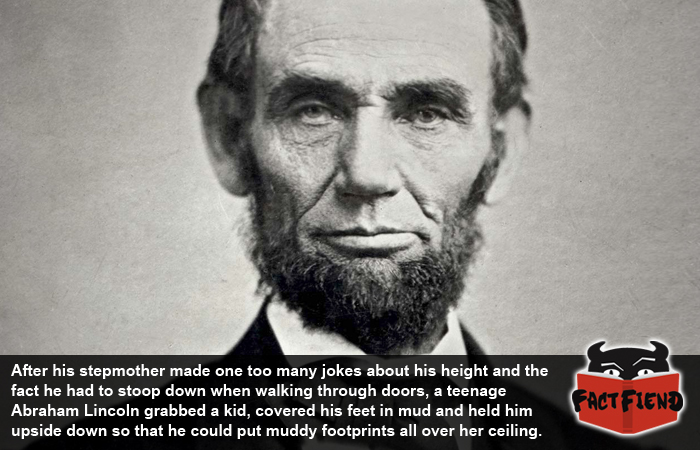 For the most part, it’s generally considered a good idea not to make fun of someone just for being tall. Along with that person almost certainly being capable of slapping you across the fucking face from across the room, it’s also a kind of shitty thing to do. As our tallest ever President, Abraham Lincoln was no stranger to such jokes, luckily he knew how to deal with them.

As noted in the macro three inches above this sentence and 8 inches below a big spider that we’re assuming is crawling on your wall, as a child, Lincoln was exceptionally tall for his age (reportedly standing close to his recorded adult height of 6ft 4 when he was barely in his teens) and his stepmother, Sarah Bush Lincoln, never stopped making fun of Lincoln for it.

While most of the jokes were good natured and not intended with any sort of malice, usually limited to jokingly telling Lincoln to keep his hair clean so that he didn’t ruin the ceiling when his big-ass head brushed against it, they inevitably took their toll. One day, after hearing one “beanpole” joke too many, Lincoln grabbed a child that had been playing in a muddy puddle outside and literally made him walk across the ceiling to cover it in shitty footprints.

When Lincoln’s stepmother returned home history books say that she saw the funny side of the joke and laughed about it, though we personally suspect that Lincoln made the kid type out a threatening message with his footprints and she only laughed along when she realised she was on thin ice, but that’s just us. Lincoln eventually repainted the ceiling at his stepmother’s behest, though it’s reported that he would still bust out the old “make someone walk across the ceiling” every now and again just to keep her on her toes.

As an adult, Lincoln similarly used a combination of his height and the freakish strength it granted him to piss off people who made fun of him, often doing things like challenging them to tests of strength to demonstrate how utterly superior he was to them in every way it mattered. Lincoln’s favourite strength challenge to shut people up was to hold an axe upright with his forefinger and thumb with his arm outstretched for several minutes before asking if they could do the same. Lincoln was also known to randomly pick up a heavy objects like barrels or effortlessly touch the roofs of houses as a way of diffusing physical confrontations by not-so-subtly showing possible threats that he could easily chokeslam the fuck out of them with little to no effort if he felt like it.

When he didn’t feel like making people feel physically inadequate, Lincoln was also fond of slapping naysayers down with withering put downs capable of causing their ego to shrink faster and more violently than a dick being dipped into liquid nitrogen. For example, during an debate with some dipshit senator about popular sovereignty, Lincoln caused the entire room to burst into laughter when he described his opponent’s argument as being as “thin as the homeopathic soup that was made by boiling the shadow of a pigeon that had starved to death” and on another he responded to the accusation that was two faced by saying “If I had two faces, would I be wearing this one?“.

However, perhaps the best comeback Lincoln ever crafted was when he was in his 20’s and one of neighbours didn’t invite the Lincoln family to their wedding. In response to the perceived snub, Lincoln he wrote a short poem accusing the groom’s brother William of being gay, including such subtle lines as “Billy has married a boy“, and then sent it to the brother. William (Billy) was so incensed at this that he sent a letter to Lincoln formally requesting to settle the matter in the only way problems back then could be solved, with a wrestling match. Because nothing says “I’m not gay” like challenging a burly man to strip to the waist and tackle you for 3 hours in a field. For the curious, Lincoln asked his stepbrother to take his place in the wrestling match then came out of fucking nowhere just as it started to suplex William into next week before telling the crowd “he was the big buck” and that anyone present who wanted a piece could step to him right then and there and he’d fuck them up too.

Unsurprisingly, nobody took Lincoln up on that offer.

So the next time you pull out a five dollar bill, just remember that along with helping abolish slavery, Abraham Lincoln also once delivered an RKO out of nowhere because he was so annoyed about not being invited to someone’s wedding. What a hero.