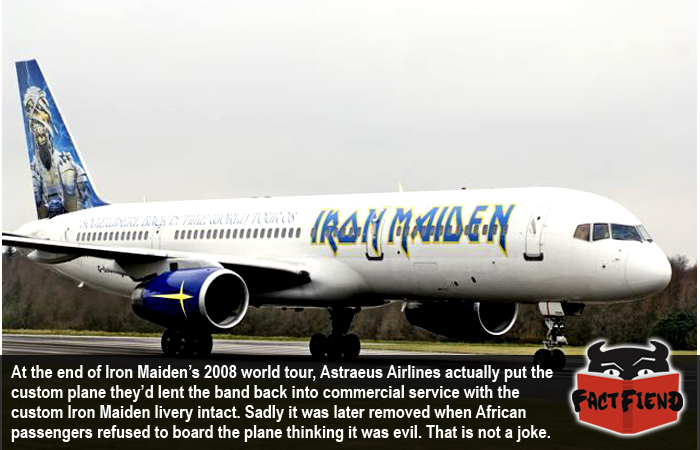 When Iron Maiden embarked on their 2008 Somewhere Back in Time tour, lead singer Bruce Dickinson managed to secure the band a custom 757 to transport all their equipment. After the band had, had their filthy, filthy way with it, Astraeus Airlines (the company the band loaned it from) actually put it back into service, with the Iron Maiden livery still attached. Because sometimes, life is just awesome like that.

While the airline were originally planning to remove the custom-made Iron Maiden decals covering the plane as soon as the band had finished with the plane, the number of customers coming forward saying “I want to go on vacation the fucking Iron Maiden way” convinced the airline to leave them be.

Now your first question is probably, how the hell did Iron Maiden convince an airline to just give them a plane? Well this was mostly thanks to Bruce Dickinson, who is a fully trained commercial pilot and was, at the time, flying planes for the Astraeus. Along with being an Astraeus pilot, Dickinson was also the Marketing Director for the company (because of course he was) and was able to parlay this into a meeting with the company’s owner, during which he simply asked for a fucking plane. Dickinson’s basic pitch was that he flew planes for them all the time anyway and the band needed a way to ensure all their equipment made it on time.

Since they had no real reason to not trust Bruce God-Damn” Dickinson with one of their planes, Astraeus Airlines happily agreed to the deal and loaned them a 757, which the band then decked nose to tail in Iron Maiden livery, dubbed Ed Force One after their mascot.

When the first half of the tour was completed, the plan had always been to remove the livery so the plane could return to regular service, however customers in Europe and the US thought livery was cool as shit, prompting Astraeus to just keep using it.  Hell, Dickinson even flew it occasionally when he had a shift with the airline. Things changed though when the plane touched down in Africa.

In a letter penned by Dickinson, it’s noted that Ed Force One was the only plane available for a trip to Africa, where the Airline had been hesitant to send it due to the fact it had a fucking zombie painted on the tail. As the airline feared African customers categorically refused to board the plane the second they saw it, stating that it was clearly possessed by evil spirits after taking one look at Eddie’s rotten, mangled face. 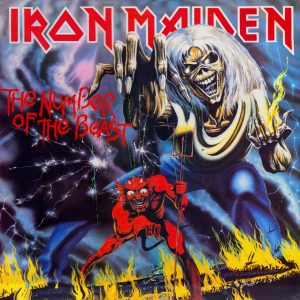 Even more hilariously, other passengers boarding entirely different planes owned by different companies also began refusing to board their flights, thinking that they too had somehow been tainted by the “bad ju ju” surrounding Ed Force One and its insanely metal paint job. Under pressure from both passengers and other airlines, the livery was quietly removed as a melancholy power chord erupted from the heavens. Passengers then boarded without incident because apparently evil demonic magic can be stopped with paint-stripper.

If you’re wondering why Bruce Dickinson himself had to explain this to his fans instead of it just being announced by the airline or something, it’s because Dickinson was using Ed Force One to personally take fans to Iron Maiden shows and he wanted to apologise to them for not being able to take them in a plane that looked like it was powered by guitar solos, beer and head-banging.

Is it just us are you all kind of disappointed now that other airlines don’t give their planes wicked paint-jobs like this one did? We’d love to fly on a plane with covered in Iron Maiden imagery, come on, American Airlines, make it happen, you know Al Qaeda wouldn’t even dare try to mess with that.