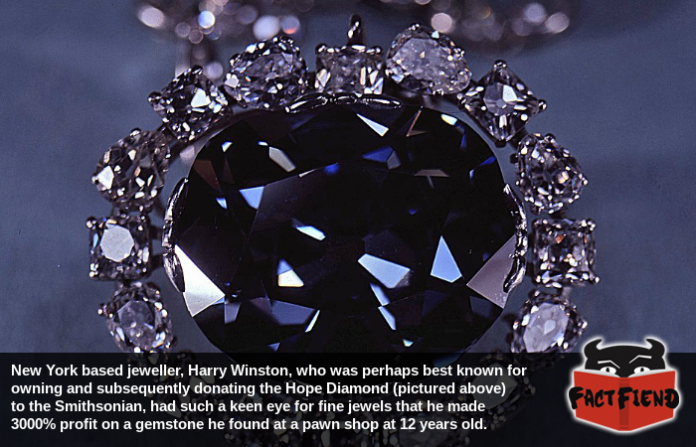 At the time of writing this article the Hope Diamond is insured for approximately a quarter of a billion dollars and it is arguably the most famous gemstone on the planet. Whilst the stone has been owned by many people over the years, one of the most curious people to have it in their possession was jeweller, Harry Winston. Mainly because he donated the hummingbird-sized diamond to a museum by sending it through the post.

Considered a natural at spotting high quality gemstones, Winston is said to have had one of the keenest eyes in the business, honed through decades of experience handling quite literally, billions of dollars worth of precious gems and metals. Even without that though Winston was reportedly a natural at spotting a good deal, famously flipping a piece of “junk” costume jewellery he bought for 25 cents for $800 at just 12 years old.

Speaking of flipping, Winston’s modus operandi for much of his career was to buy job-lots of gems from estate sales which he would then take and reset in more stylish, modern pieces. Selling the resulting creations for many times what he initially paid. However, on occasion Winston was known to pursue individual gemstones he wanted across the world. Sometimes trading literal piles of smaller gems for a singular, much larger one. 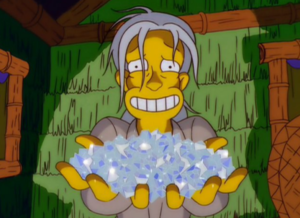 Which brings us to the Hope Diamond, which Winston bought in 1949 and promptly refused to sell, instead making it the focal point of a collection of massive fuck of gems he owned dubbed The Court of Jewels. A collection we feel compelled to mention included a colossal rough gemstone called, we shit you not, The Jonker. This said, the Hope Diamond was easily the most famous piece Winston owned.

With that in mind you’d probably expect to hear that Winston jealously guarded the diamond for the rest of his life, making it the literal crown jewel of his Smaug-like hoard of gems. However, Winston, a noted philanthropist, actually donated the gem to The Smithsonian in 1958. Something the museum was reportedly ecstatic about, until they learned that Winston planned to send them the gem via the post.

Yep, as unbelievable as it is going to sound Winston sent a million-dollar diamond through the post, famously paying just $2.44 in postage to do so. This said, Winston did pay a further $142 or so to insure the package for a cool million dollars. Even then, you have to admit it was a pretty ballsy move to send a diamond the size of your thumb through the post instead of via armoured car or Lord of the Rings eagle.

What makes this story just a little more insane though is that Winston didn’t even bother to post the package himself, instead handing it off to an employee who had no idea they were carrying the most famous gemstone in the world in their hands. At the other end of the delivery the postal worker who ended up delivering the package, James G. Todd, likewise had no idea about the value of what he was handling. Only discovering that he’d been carrying a quarter billion dollars worth of diamond when a Smithsonian curator opened it in front of him.

A fact papers of the time framed as being a bit of a dick move considering the Hope Diamond was supposed to be cursed. How cursed you ask? Well just a year after delivering the gem Todd was involved in two different car crashes, had his wife die of a heart attack, his house burn down and walked outside one day to find that his dog had inexplicably strangled itself to death.

When later asked if any of this had made him believe in the curse, an unperturbed Todd responded that life could be worse. Which yeah, we guess is accurate.