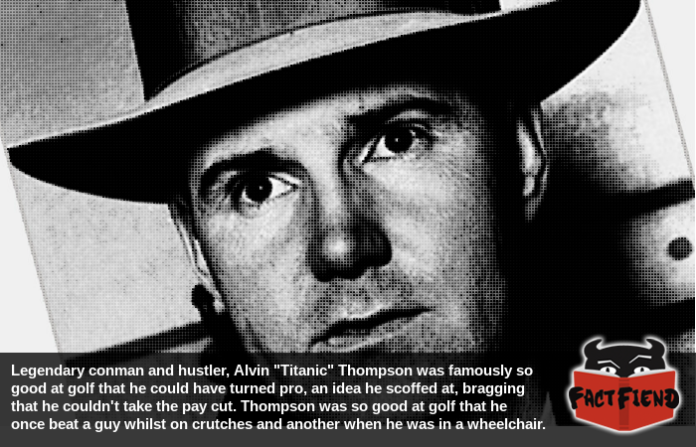 There aren’t many careers out there that pay better and have more perks than professional athlete, or at least we thought so until we learned about Titanic Thompson. A man who repeatedly turned down offers to become a pro golfer, because he couldn’t take the pay cut.

Born Alvin Clarence Thomas but known professionally as Titanic due to his habit of sinking people, Thompson was known for making and then winning seemingly impossible bets and wagers. For example, a common bet Thompson would make with people at bars and the like was that he could throw a walnut clear over whatever building they were in. A feat that sounds ludicrous if not outright un-fucking-doable, right? Well what Titanic didn’t tell people was that he’d hidden lead inside the walnut, giving it just enough weight for him to heft several hundred feet through the air like the Hulk punting an engine block into orbit.

Other famous wagers won by Thompson include jumping clean over a pool table for a $200 bet (half a years wages for an average man at the time) by using an old mattress he found outside, guessing the exact amount of melons in a passing truck by bribing the driver to count them first and drive past his hotel at a specific time and casually glancing out of a window and claiming that a town’s sign was off by a few feet. The latter he’d accomplish by sneaking out at night and moving the sign the exact distance needed to make him right. 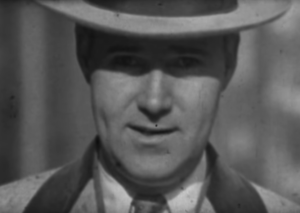 Now while Thompson usually went to great, often immoral, lengths to stack the odds of any bet in his favour, he was more than capable of winning many wagers through sheer physicality and skill. For example, Thompson was noted as being both a crack shot and exceptionally talented natural athlete, skills he used to do things like score things like free stays in hotels by betting that he could throw his key into the pigeonhole for his room from across the lobby then, presumably, celebrating like a complete jackass.

However, Thompson’s real talent was golf, something he was so good at many professionals of the sport claimed he could have been one of the greatest players in history if he’d ever given enough of a shit to actually try. The thing is, Thompson never did because he made far more money hustling other golfers.

For example, Thompson was naturally left-handed but taught himself to play golf right-handed purely so that he could win double-or-nothing bets by switching to his “bad” hand mid-game. 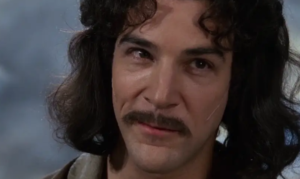 Other ways Thompson would hustle golfers included hiring young up-and-coming golfers to be his caddie and then, after beating someone, bragging that his caddie could beat them. When the golfer inevitably took Thompson up on this bet, his caddie would proceed to casually style all over them, doubling Thompson’s winnings for the day and earning themselves a very generous tip.

A man known for his sense of bravado, Thompson would frequently handicap himself, sometimes literally, to try and get people to bet against him. Popular ploys of Thompson included turning up to play with a cast on one or sometimes both of his arms, a bandage over one eye and sometimes even a fucking wheelchair.

In regards to that last one, Thompson got so good at playing in a wheelchair that he taught the skill to others. Why? Well so that he could goad high-rollers into making obscene bets by mentioning that he knew a guy in a wheelchair who could play better than they did. When the high-roller inevitably took this bet, Thompson’s friend would roll up, beat them and split the winnings with Thompson. In the end, Thompson could have very likely turned pro, or even just becoming a millionaire from such bets, but he ended up squandering both his talent and fortune betting on horses. A fairly ignoble end for such a legend, but one that undoubetedly suited his lifestyle.