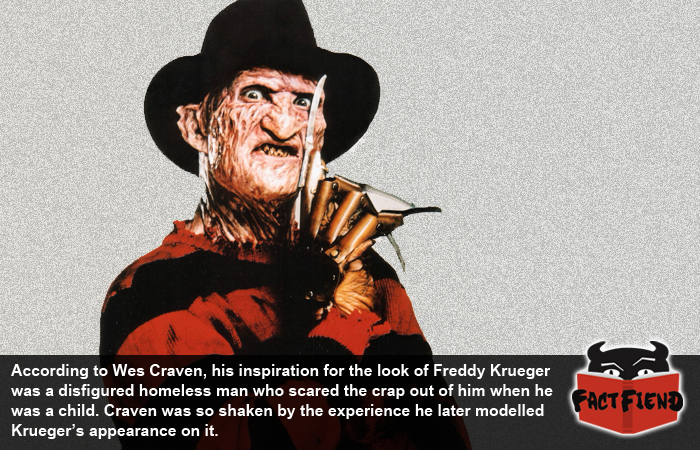 Continuing with our theme of spooky Halloween related content, today we’d like to talk about another legend of classic horror, Freddy Krueger, more specifically we want to talk about how his look was inspired by some random homeless dude.

Yes, according to Wes Craven, the gnarled, monsterish viasge of Freddy Krueger was inspired by a unnamed homeless who was apparently just as scary Krueger himself. We say this because according to Craven, the image of the disfigured vagrant stayed with the director his entire life and looking at Krueger, it’s not hard to see why.

As for the name Freddy Krueger, again according to Craven, as a child he was bullied by a kid called Fred Krueger. When the time came for him to think of a name for the child molesting asshole who murders people in their sleep he’d made up, he opted to use his bully’s name because fuck him. The rest of Krueger’s appearance was apparently partially inspired by the obscure DC superhero, Plasticman. Craven was a big fan of plastic man as a child (which kind of explains why he was bullied so much) and loved that when he disguised himself as a lamp or something, you could always tell because of his costume.

Craven wanted Krueger to share this trait when he was hiding in people’s dreams and decided to make him wear the most butt-ugly sweater he could think of so that he’d stand out more when disguised. As a final, subtle touch Craven consciously made the sweater an obnoxious blend of two specific shades of green and red because he’d read that those colors are apparently the ones that clash the most and look most unsettling to the human eye.

In other words, Wes Craven named a child murder after his childhood bully, made him wear literally the most ugly sweater he could find and then made him look like a burned testicle.