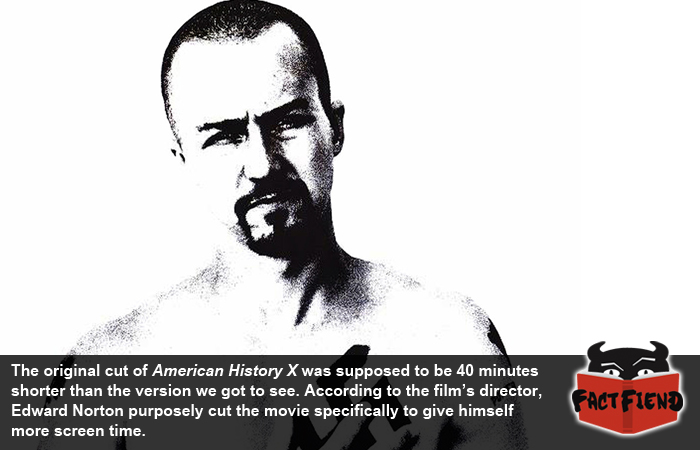 American History X is a powerful, emotional movie all about how being a huge racist dipshit doesn’t always work out well in the real world. The movie was received well by critics, who particularly praised Edward Norton’s performance, which probably has something to do with the fact he supposedly edited the movie to give himself more screen time.

As noted in the image above, there was an earlier cut of the movie that was, according to the director, about 40 minutes shorter than the movie we got to see. According to Tony Kaye, the director, he wanted a shorter, more impactful movie that got straight to the point, you know, that racists are assholes. However, this didn’t gel well with the vision that Edward Norton, or the studio had, so the studio allowed Norton to re-cut the movie, who for some reason, decided that the movie had to include more scenes of Edward Norton.

While it’s not clear exactly what scenes were added or removed because no legitimate copy of Kaye’s cut has ever been released, there is an apparent copy of the “directors cut” of this movie floating around online that can be accessed via less than legitimate means.  According to people who’ve seen it, along with being slightly shorter (though nowhere near the 40 minutes Kaye insists) than the version released in cinemas and on DVD and Blu-Ray, it features several differently framed scenes and Norton has noticeably less screen time. While the veracity of this cut of the movie has never been confirmed, the fact it features scenes and shots that have yet to appear elsewhere would suggest that it’s genuine.

Curiously, there is also an early workprint of the film’s original cut, which was overseen by both Kaye and Norton, out there that is about 18 minutes shorter than the theatrical release. Like the supposed directors cut, this version of the film features differently shot scenes and has slightly less screen time from Norton. Interestingly, a thorough comparative analysis of both of these cuts shows that there is “no real differences in the plot” save for the shuffling of a few scene and some different sound editing.

As for what happened to the deleted scenes from Kaye’s version of the movie, nobody seems to be sure where they went. There’s a rumor that Norton deleted the master copies, which we wouldn’t past him if he was wearing his Neo-Nazi make-up at the time, but otherwise it sounds unlikely. There’s also the possibility that they simply don’t exist and Kaye is making shit up, which wouldn’t be out of the realm of possibility for a man who once went to a meeting with studio executives with a Monk, a Rabbi and a Priest in tow*. Because the movie went through such a long and protracted post-production process, discerning exactly what happened is difficult, especially when you realise that depending on who you believe, there could be up to 4 different cuts of this movie. First there’s the copy Norton and Kaye worked on together which reportedly went down really well with test audiences. Then you have Kaye’s shorter cut which is either lost or no longer exists. Next you have the cut overseen by Norton, which is the version we got to see. Then there’s the Blu-Ray version which is slightly longer and features a few deleted scenes. It’s kind of fucked up is what we’re saying.

*Note: he once really did this.

We guess until someone either confirms or denies these rumors outright, we’ll never know exactly what happened during the post-production process of this movie. What we do know though is that it proved to be a huge hit with actual Neo-Nazis, many of whom would apparently watch the film’s opening and then leave before Norton’s character reformed after realising that black people are okay. 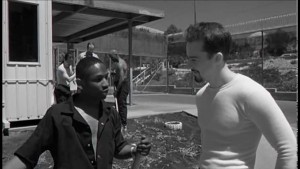 This film was right. Racists are idiots.