Coma the Doof Warrior is one of the most memorable aspects of Mad Max: Fury Road and it’s not hard that hard to see why. He looks like a member of Slipknot with Ghost Rider’s powers and spends all 10 minutes of his screen time shredding the shit out of a flame-spitting guitar. A guitar as it turns out, actually worked in real life, largely because nobody had the balls to tell George Miller a flame-thrower/guitar hybrid was unfeasible

According to Miller 90% of all the crazy shit you see on screen during the film was realised entirely with practical effects with the remaining 10% being CGI. At Miller’s behest CGI was used sparingly and mostly to enhance already awesome scenes. For example consider before and after picture below, the crew actually crashed a real car with a real stuntman inside it, but then used CGI to add some flames and a mountainous background. Stuff it’s hard to notice and difficult to distinguish from the actual, real action happening on screen, which we guess is kind of the point. 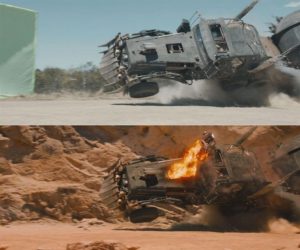 Miller’s insistence on practical effects is well known in the industry and a long-time collaborator of his called Colin Gibson noted in an interview that the director has a particular dislike for “things that don’t work“. Specifically Miller doesn’t like props that can’t function as they’re supposed to on-screen and as a result, Gibson was probably shitting all kinds of bricks when he was hired to work on Fury Road and found out he’d have to build THE DOOF WAGON. 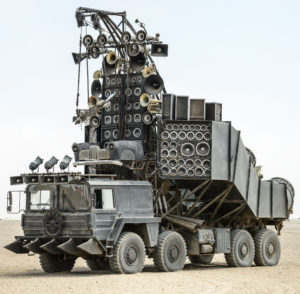 Believe it or not that metal monstrosity was a fully functional rolling PA system with a real flame-throwing guitar strapped to the roof. Initially though neither the truck’s speakers or the guitar worked and were instead just props that shot fire out of the end, which the design team felt was acceptable because the sound would just be pumped in later, right? Well, not really and it’s reported that Miller became very annoyed when he checked in on the prop and asked someone to plug it in so he could see it work as a guitar. At this point Miller was told by his design team that while they’d figured out how to make the prop shoot flames, they’d neglected to add strings or pickups so it couldn’t actually function, or be classified as a guitar. Miller told his design team to fix this and figure out a way to make the guitar functional and then to wire it up to the speakers on the Doof Wagon.

Not wanting to piss off Miller further, the design team quickly added pickups and strings to the flame-hucking base they’d built and connected the whole thing to the wall of speakers on top of the truck. This allowed the guy who played the Doof Warrior, an Australian musician called iOTA, to actually play the instrument and shoot flames whenever the fuck he felt like while barrelling through the African desert atop the Doof Wagon. Although the sounds made by the guitar weren’t ever intended to be used in the final film, Miller felt it was important for iOTA as a musician to be able to hear the music he was playing while he recorded his scenes. Miller also wanted the audience watching at home to know that when they saw the Doof Warrior shredding his little war boy heart out on screen, they were watching an actual musician ass-fuck a real flame-shooting guitar as hard as they could.

According to iOTA, although the guitar worked, it admittedly sounded like shit, which he felt suited the movie since in-universe it was a cobbled together piece of crap being played by a blind guy strapped to a screaming hunk of metal travelling at 70 mph.