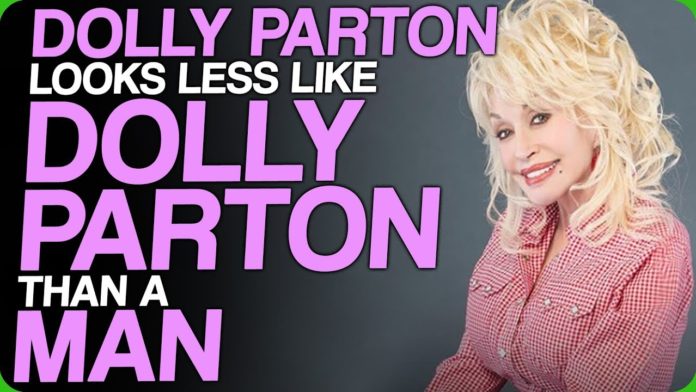 Dolly Parton is 3 parts make-up, 2 parts hairspray and 1 part an empty bag of fucks. She’s a pint-sized powerhouse of rock and roll energy with a kick-ass set of tits. So lets talk about that time she lost a lookalike contest to a big giant man.

Exactly when this happened isn’t clear because all reports of it come directly from Dolly herself. Now ordinarily we’d be hesitant to repeat a story with only a single source but when that source is Dolly “Fucking” Parton, we’ll make an exception.

According to the singer this particularly embarrassing incident occurred when she spied an advert for a celebrity lookalike contest specifically for drag queens and noticed that half of the contestants were dressed like her. Curious to see if anyone would actually be able to recognise her, Parton entered the contest too because Dolly Parton does whatever the fuck she wants.

After noticing that all of the other contestants dressed as her had over exaggerated things like her bust size, hairstyle and make-up, Parton slipped away to a bathroom and slapped on a few more layers of eye shadow, pushed out her breasts and backcombed her hair to make it look even puffier than usual. Parton then dutifully joined the back of the line of drag queens and waited patiently to go on stage and do her best impression of, well, herself.

Parton reports that she almost pissed herself laughing when she walked out on stage, did a twirl and instead of whoops and screams was rewarded with a polite, ever-so-slightly sarcastic smattering of applause from the audience. Remember this is a woman who once got a crowd more hype than fucking Metallica did at a rock festival and all she could muster from a crowd of people who considered her one of their idols was a limp, flaccid round of applause.

To add insult to injury, Parton would later recall that the actual contest was won by a 6ft something drag queen dressed as her who later complimented her outfit but told her that her breasts didn’t look big or fake enough.